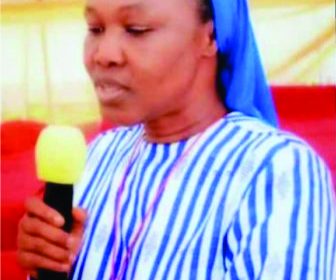 The Catholic Archdiocese of Lagos has commiserated with families of victims of the Abule Ado explosion on Sunday which claimed many lives including  Rev. Sr. Dr. Henrietta Alokha, principal of the Bethlehem Girls College, Abule Ado, and one female security guard.

A Statement signed by Archibishop Alfred Adewale Martins of Catholic Diocese of Lagos and made available to Media stated that no priest died in the massive explosion at the Abule Ado area of Lagos, which led to the collapse of many structures in the affected areas on Sunday, March 15.

Stating that no student also died in the disaster, Martins said: “We do not have an official duly investigated explanation for the explosion yet. All we know is that a truck accident was involved, the Pipeline going through the community was involved as well as a stack of gas cylinders. All these together by some series of cause and effect are said to be the cause of the devastating explosion which very badly affected our Bethlehem Girls College, Abule Ado, as well as many other buildings in the vicinity.

“This sad incident occurred while the students and staff were at Sunday Mass. With the help of the first respondents, all the students were rescued and some that were injured were rushed to the hospitals. The other students have been released to their parents and gone to their different homes.

“We want to state that all students in the school were reported safe. Those who sustained injuries were promptly attended to in various hospitals within the environs. We are getting our Education Department along with the Administrators of other Archdiocesan schools to see how the students of Bethlehem Girls College can be accommodated in the other schools so that their education is not disrupted.

May their souls rest in peace. It is important to confirm that no priest died during the incident. The priest who was celebrating the Mass helped in rescuing the students and he himself is safe.

“Unfortunately, the Staff quarters, Administrative Building, the refectory and hostel buildings were levelled to the ground as a result of the impact of the explosion with no essential building standing except the convent housing the nuns in charge of the school.”

The archbishop commended the Lagos State Emergency Management Agency, LASEMA; Nigeria Emergency Management Agency, NEMA, the Red Cross, the various Security Agencies for their prompt response which ensured that the situation did not get worse, adding “We are grateful to the Governor of Lagos State, Mr. Babajide Sanwo-Olu for his call to express the sympathy of the Government and for setting up a Committee to investigate issues surrounding the explosion.”

“We wish to commiserate with the families of all those who died in this sad incident. We pray for the repose of the souls of the departed and the quick healing of those who were injured. We pray the Lord to provide for the needs of all those who lost their properties, in the said event. Our prayer at this period is that the Good Lord will grant eternal rest to the faithful departed and strengthen all of us with the fortitude to bear the effect of this disaster,” the statement said.

READ  US: Our President Gave Us So Much Hope’: MyPillow CEO Goes Off Script At Coronavirus Briefing