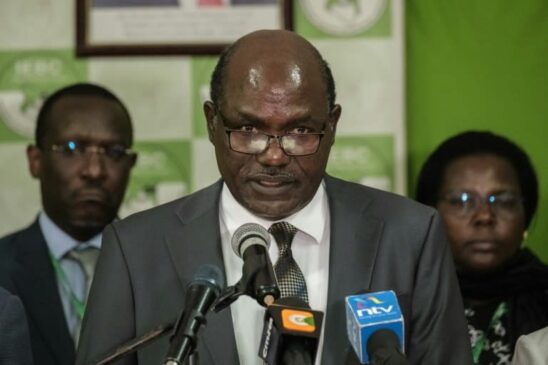 The number of young voters registered for Kenya’s August elections has dropped since the last poll five years ago, the election commission announced, pointing to apathy among a youth disenchanted by economic hardship and widespread corruption.

This is despite the total number of people who have signed up to cast their ballots increasing by more than 12 percent, the Independent Electoral and Boundaries Commission (IEBC) said after an audit of the voters’ roll.

There will be 22.1 million voters on the register — often seen as a key point at which an election can be rigged — up from 19.6 million five years ago.

“The number of youth registered to vote in 2022 stands at 39.84 percent which is a decline of 5.27 percent against 2017,” IEBC chairman Wafula Chebukati said.

Under-35s account for three-quarters of Kenya’s population of about 50 million, according to government figures.

Women were “still under-represented” in the voter register with their number accounting for 49 percent of the total, Chebukati said.

The East African economic powerhouse will hold presidential and parliamentary elections on August 9, in the shadow of previous polls which have often been marred by ethnic violence.

With its diverse population and large ethnic voting blocs, Kenya has long suffered politically motivated communal violence around election time, notably after a 2007 poll when more than 1,100 people died.

Many young voters are showing little appetite for the election this year, disillusioned with a political elite widely seen as inept and corrupt.

During the audit, more than 246,000 deceased voters were removed from the electoral roll, the IEBC said.

Chebukati said the body was releasing the figures “in the spirit of transparency and commitment to public confidence in the register of voters”.

This year’s presidential contest is shaping up to be a two-horse race between Deputy President William Ruto, 55, and 77-year-old Raila Odinga, a veteran politician and former prime minister.

Two other candidates have been cleared to contest the race to succeed President Uhuru Kenyatta, who must stand down after serving the maximum of two five-year terms.

Ruto was initially anointed by Kenyatta as his successor but has found himself out in the cold after Kenyatta and Odinga forged an alliance in 2018.

Ruto is hoping his rags-to-riches journey from street hawker to a top-ranking politician will resonate with Kenya’s youth, fashioning himself as a spokesman for “hustlers” trying to make ends meet in a country ruled by “dynasties”. The Kenyatta and Odinga families have dominated Kenyan politics since independence in 1963.