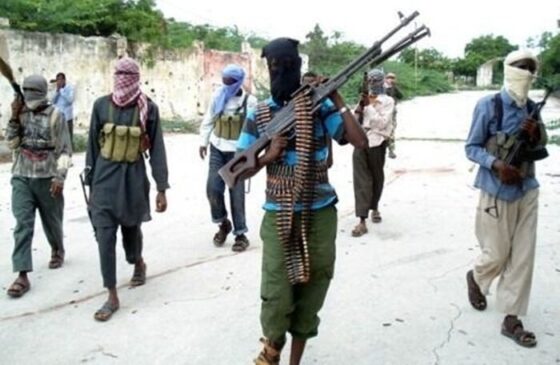 Terror organization, ISIS, on the run from Europe and Asia since 2014, is desperately trying to establish itself on the African continent by setting up links with local terror bodies. In the process, its jihadist ideology has secured a fresh lease of life to expand the influence of the Islamic caliphate.

Several African countries where civil-military differences are weakening the social and economic fabric are now the hunting grounds of ISIS. Even among them, the terrorist organization prefers countries where Islamist politics has reared its head. The world has noticed the silence of orthodox Islamic clergy in the face of the rogue expansion of the Islamic terror bodies in Africa as they escape the western military forces in west Asia and Europe, especially from Syria and Iraq.

It is perhaps as a result of the pressure on these terror groups that in recent months, both Europe and Africa have witnessed lone-wolf attacks in public places. It is seen by terror-watchers as a sign that even ISIS, or al-Qaeda for that matter, are not willing to waste men and material in major acts of violence. ISIS has formally ordered lone-wolf attacks in mid-2020 – that much is established. But that has also increased the fervor of these bodies to establish new bases, especially in Africa.

ISIS State is taking over swathes of Africa as it did in Syria and Iraq with “staggeringly brutal” tactics, the Pentagon has warned a couple of months ago. A report from West Point, the US officer training academy, says: “By the summer of 2020, it had become resolutely clear that the Islamic State was a changed organization, but by no means a beaten one.”

The Pentagon report said there had been a “marked upward curve of claimed cumulative attacks and casualties” across Africa, but the “largest and most sophisticated” presence is in West Africa and the Greater Sahara. “ISIS in West Africa is engaging in operations that are increasingly audacious, staggeringly brutal, and worryingly akin to what ISIL, as it was known at the time, was doing in early 2014,” it said.

ISIS is said to have several tactical headquarters where its second-rung leadership is settled, for the time being, giving them breathing space after they were thrown out of Mosul, Iraq.

The group has “expanded its influence on the continent through a network of affiliates in West, North and East African regions”. North Africa is most significant for ISIS, with “affiliate groups in Morocco, Algeria, Tunisia, Libya, and Egypt”.

According to anti-terror watch groups, in West Africa, Boko Haram pledged allegiance to ISIS in 2015. The Islamic State in West Africa or the Islamic State’s West Africa Province, formerly known as Jamā’at Ahl as-Sunnah lid-Da’wah wa’l-Jihād and commonly known as Boko Haram, is a jihadist terrorist organization based in north-eastern Nigeria, also active in Chad, Niger and northern Cameroon, and responsible for some of the worst violent attacks in recent times.

However, the group does not rely on ISIS for resources or operational support, and Boko Haram’s recruitment base still primarily originates from northeast Nigeria and countries of the Lake Chad region. In Western Sahel, ISIS has enlisted the support of an al-Qaeda splinter group, but the group’s presence in the region remains marginal.

In East Africa, the reports say, an al-Shabaab splinter group pledged allegiance to ISIS in 2015 but did not succeed in establishing itself in Somalia, or the wider region. The group’s operational visibility in Central and Southern Africa has been primarily absent. Harakat al-Shabaab al-Mujahideen, more commonly known as al-Shabaab, is a terrorist, jihadist fundamentalist group based in East Africa. In 2012, it pledged allegiance to the militant Islamist organization, Al-Qaeda.

Faced with the pressures in Iraq and Syria, a number of scenarios could play out. Abu Muhammad al-Adnani, ISIS’s chief of external operations who was killed last year, said one strategy would be for the group to temporarily set aside its statehood aspirations and revert to more traditional terrorist strategies – operating underground.

Furthermore, in the wake of the defeat in Mosul, Abu Bakr al-Baghdadi – the leader of ISIS – has called for supporters to refrain from traveling to Iraq, and to focus on strengthening its networks elsewhere. Therefore, ISIS might try to regroup using organizations that have pledged allegiance in Africa and South-East Asia.

ISIS is in competition with al-Qaeda in “conquering” Africa. Reports suggest that since 2014, “ISIS has built an effective propaganda campaign based on its battlefield successes, territorial control and proclamation of the caliphate, and financial prosperity”. This kind of violent extremism has helped it gather the support of nearly 30,000 foreign fighters since 2011. They include “potential al-Qaeda recruits attracted by the group’s propaganda and image and al-Qaeda-affiliated groups and individuals around the world who switched to ISIS or pledged allegiance to the caliphate”.

But, al-Qaeda is said to have weathered the poaching by ISIS and has increased its capabilities in Africa in the last two years. It has managed to undermine the growth of ISIS in sub-Saharan Africa where al-Qaeda has a stronger foothold.

ISIS is studying the activities of an important Islamic terror body of Africa, known as Da’esh before deciding on any informal ties with it. It is formally known as the Islamic State in Iraq and the Levant (ISIL).

The latest report of the UN Secretary-General on the threat posed by ISIL (Da’esh) says: “Since 2014, ISIL has used its online publications to reach potential foreign terrorist fighters and social media to directly engage individuals, encouraging them to join its ranks. It has also targeted specific skill-sets and tailored its message to different linguistic groups using foreign terrorist fighters primarily based in Syria and Iraq to reach out to individuals in their countries of origin in their own language. Once engaged in dialogue, ISIL recruiters and enablers quickly shifted their communications onto a wide range of encrypted applications, complicating efforts in home countries to monitor and investigate such contacts.”

The Twenty-sixth report of the Analytical Support and Sanctions Monitoring Team of UN) concerning ISIL (Da’esh), Al-Qaida and associated groups in July 2020 say the ISIL, of all terror groups operating in Africa, is professionally managed and therefore in a better position to carry out more terror attacks in the near future.

Its report says ISIL handled the COVID-19 situation with a change of operational tactics because of which its attacks continued in Africa while those of other organizations became less frequent. It explains why: “ISIL propaganda and media output have been largely unaffected by COVID-19, but the group’s commentary on it has broadly covered four areas. First, ISIL has urged attacks on its enemies while they are weakened and distracted. Second, the pandemic has been presented as divine punishment of the West and a cause for celebration. Third, the group has recognized that the virus could be weaponized (though the Member States report no attempts to do so in practice). Four, seeking to protect its members from COVID-19, ISIL has embraced social distancing and, in mid-March 2020, advised against travel to Europe.”

The relative strengths and weaknesses of the top terror groups in Africa are also a subject of a recent study. In West Africa, “ISIL franchises in West Africa and the Sahel continued to enjoy operational success in early 2020, as have those of Al-Qaida, heightening international concern about stability in the region”.

In North Africa, ISIL-Libya represents a threat to the stability and security of Libya and its environs, exacerbated by the ongoing Libyan conflict. In the Greater Sahara region, the peaceful coexistence of JNIM and the Islamic State in the Greater Sahara has reportedly ended because of internal contradictions between the two.

In East Africa, al-Shabaab continued its activities and attacks across Somalia unabated and largely unaffected by the COVID-19 pandemic. Al-Shabaab ideologues and clerics continued to disparage the COVID-19 threat and resisted lockdown attempts in various administrative areas under their control. Beyond Somalia, emboldened by the January attack on a United States military base on the Manda Island in Kenya, Al-Shabaab leadership urged its fighters to conduct attacks abroad.

In Central and Southern Africa, terror activities of ISIL in Somalia and Islamic State Central Africa Province (ISCAP) in Cabo Delgado, Mozambique, gained momentum in early 2020 as the group launched complex attacks on several locations. ISCAP operatives briefly took over some villages and they openly addressed inhabitants while displaying ISCAP banners. In a communiqué issued on April 23, 2020, the Mozambique authorities acknowledged the role of ISIL in the attacks and links to foreign terrorist elements.

While these terror groups jostle with one another to expand their territories in Africa, one thing becomes clear: ISIS continues to be the primary terror brand on the continent. Even though local groups are not really fascinated by the Islamic caliphate theory, they are attracted by its “prosperity” in terms of finances and weaponry. The internal problems of al-Qaeda have also contributed to the increasing lure of ISIS.

Could this result in these groups attempting to outcompete each other in terms of increased attacks and brutality in Africa? The African nations are now beginning to understand the threat Islamic terror poses, particularly in the form of ISIS because not only is it trying to expand its operations, but it is also acting as a beacon of light for fellow Islamic bodies. ISIS needs to be prevented from regrouping and gaining a stronger foothold in North Africa and regional cooperation is mandatory to prevent the group from extending its influence to west and east Africa.

Sarr is an independent security analyst based in Dakar, Senegal