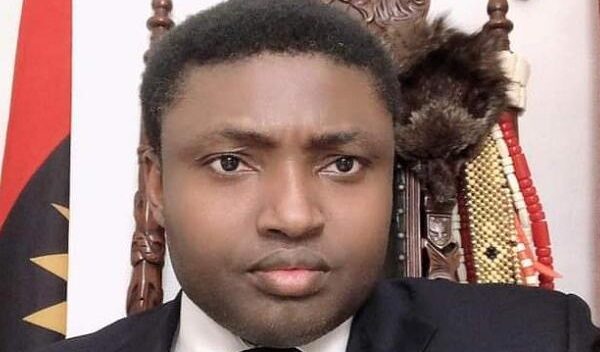 There was panic in the South-East a few days ago when a viral video by the self-acclaimed leader of the Indigenous People of Biafra, IPoB, Simon Ekpa, ordered people to observe a sit-at-home from December 9 to   14.

Another viral video displaying an AK-47 rifle with a voice note threatening death for anyone that violates the sit-at-home order complicated the matter.

This was greeted by a spontaneous outrage as eminent Igbo personalities and organisations including Ohanaeze Ndigbo fumed.

The leadership of IPoB was the first to disown the purported sit-at-home order, saying it never emanated from the pro-Biafra movement.

IPoB in a   statement by its Media and Publicity Secretary, Emma Powerful, urged residents of South-East to ignore the order, describing it as mischievous and “anti-Biafra.’’

According to the state, ‘’IPOB never issued any sit-at-home order because we are not miscreants, senseless or jobless people.

“ Every Biafran resident in Biafra land should ignore such an order from untrained and brainless individuals whose agenda is to make Biafra agitation unattractive to our people. Every Biafran must go about their normal business.

“ IPoB which is concerned about our people cannot issue such a brainless and uncaring 5-day consecutive sit-at-home order to suffer our people during this critical time of the year.

“ The conception of 5-day consecutive sit-at-home order is to show the level of wickedness and hatred they have against our people. Their agenda is to create insecurity and unnecessary hardship.

“Our people should be prepared and ready to confront any fool who dares to enforce such wicked sit-at-home. Moreover, ESN operatives and IPOB volunteers will be out on these dates to protect our people and the markets.”

Ohanaeze cautioned him against issuing orders that hurt Igbo interest out of youthful exuberance, wondering if he is “ a hero or villain”.

The apex Igbo body also frowned at the indiscriminate dishing of unguarded statements by various self-appointed Igbo youth leaders without due consultations, noting that even the late Biafra warlord, Dim Chukwuemeka Odumegwu Ojukwu, widely consulted with the stakeholders of the defunct Easter Nigeria before declaring Biafra in 1967.

Elder statesman and former Governor of Anambra State, Chukwuemeka Ezeife ( Okwadike Igboukwu), also reprimanded Ekpa and all those behind the viral video, warning them not to rock the economy of the South East.

Kanu himself disowned the viral video and urged the people to discountenance it.

Kanu, who spoke through his brother, Emmanuel Kanu, who visited him at the facility where he is currently detained, said he never authorised the order.

Meanwhile, findings by Sunday Vanguard showed that residents ignored the sit-at-home order and went about their lawful businesses.

Apart from the reported sporadic shooting in parts of Imo State last Friday evening, other parts of the South-East have so far been peaceful.

Following the scenario, some are wondering if there is a leadership tussle in IPoB.

Ekpa, who addresses himself as a disciple of Nnamdi Kanu in his broadcasts on Facebook and other social media platforms has a large followership.

However, all do not seem to be well following his ‘right wing’ approach towards the Biafra struggle since the rendition of Kanu from Kenya in June 2021.

His seeming militant position pitched him against the leadership of IPoB.

Ekpa and his fans see the leadership of the group under the interim command of Mazi Chika Edoziem-led Directorate of State, DOS, as weak.

For instance, when the DOS ordered Monday sit-at-home to protest Kanu’s detention and later rescinded the order following public outcry, Ekpa and his ‘ far-right crew’ accused Edoziem of compromise.

He has since remained combative in his broadcasts and general approach most of which are considered to be endangering lives.

Meanwhile, IPOB has denied any leadership tussle in its hierarchy, explaining that Ekpa has never been its member.

Powerful in a series of statements disowned the Ebonyi-born Finland-based legal practitioner and warned people against associating him with IPoB.

In his latest statement, Powerful descended on Ohanaeze image maker, Ogbonnia, as well as Igbo leader, Ezeife, for allegedly referring to Ekpa as IPoB Leader.

He maintained that Kanu is the Leader of IPoB, warning against referring to any person as a factional leader of the movement.

He alleged that Ekpa was being used by a serving governor and a senator from the South East to break the ranks of IPoB.

Powerful said:” We warn Dr Alex Ogbonnia and Ezife never to address him as a former IPoB leader.

“For proper information, IPoB has had no other leader since its formation and will not have any other leader except Mazi Nnamdi Okwuchukwu Kanu who is currently in DSS solitary confinement because of the liberation of the Biafra nation.

“Every living Igbo person, non-Igbo, and the whole world know who the Leader of IPoB is and that IPoB has never had any other leader.’’