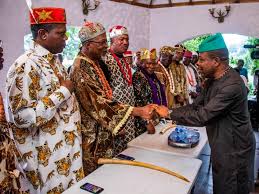 Imo State Governor, Emeka Ihedioha, has promised to give five percent of the monthly allocation of the local government areas in the 27 local councils of the state.

The governor who Address monarchs of the 647 autonomous communities at the Eze Imo Parliamentary Palace Chambers, Mbari Street, Owerri, Ihedioha assured the monarchs that his administration would provide them with five percent of the required monthly federal allocation as enshrined as this would help them grow judiciously. And also the allocation was lawful and would help the royal fathers to develop their domains.

“I met a state where many things had gone wrong. But that is why we have come to rebuild. I cannot do this without the Ezes (traditional rulers). I urge you to join hands with me to rebuild IMO,” the governor said at the meeting. He assured that he would rule the state without fear and favor, suspending all the monarchs’ coronation ceremonies and cancellation of all the recognition of the monarchs from January 2019, in order to restore traditional institution in the state.

The governor, accompanied by his deputy, Gerald Irona, lamented the bad state of the economy in the past.