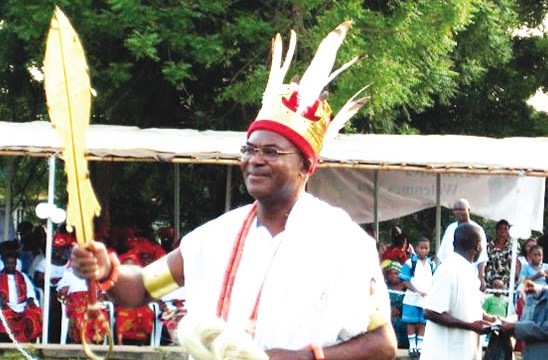 Obi of Onitsha, Igwe Nnaemeka Achebe is set to mark his 20th coronation anniversary (Iru-Ofala) at Ime Obi Onitsha between Oct. 22 and Oct. 23.

Igwe Achebe will also be using the occasion of the Ofala to commemorate with thanksgiving his 20th anniversary as monarch.

The Ofala dates back to about 700 years ago, at the time of Eze Chima is the high point of the Onitsha ceremonial cycle. The Obi of Onitsha is the celebrant of this spectacle which is rooted in deep spirituality. The Ofala is an occasion for the monarch to fulfill certain obligations.

Globacom has also reaffirmed its status as one of the official sponsors of the annual event.

from seclusion, during which period the monarch has successfully negotiated the fortunes of the kingdom.

It is also a re-enactment of the joy which the monarch shared with his subjects, at the discovery that yam is non-toxic, and a valuable source of food.

Four days before the festival, the Igwe goes into seclusion. He retreats to commune with his ancestors, and to thank them for protecting him and his subjects for the past year as well as pray for peace and prosperity in the year to come. On the day of the festival, the Obi makes three appearances.

After the early morning rituals, the trumpeters announce his entry before he shows up, fully dressed in his royal regalia, highlighted with the royal crown (okpu ododo), acknowledging the crowd that would have gathered by waving at all the directions to the people and then returns inside.

It serves as rite of renewal for the king or Obi. The term ofala is derived from two Igbo words – ofo (authority) and ala (land). The festival is celebrated within two days mostly in October by the king or Obi.

Speaking at a Press Conference in Onitsha on Thursday, Chief Mike Areh, the Onya Ozoma of Onitsha, and Chairman of the Ofala Steering Committee observed that “the Onicha Ado N’Idu community is looking forward to celebrating the 2022 Ofala in the normal way after two years in which the Covid-19 Pandemic has meant that the ceremonies have had to hold devoid of the usual fanfare.

He added, “We shall now move on with the process of getting the Ofala, to attain the status of a major event in the Nigerian, and by extension in the West African cultural/tourism calendar.”

He said that Globacom has been partnering with the Onitsha Traditional Council since 2011, adding that the relationship between these bodies and the Onitsha community has contributed in no small measure to the growth and development of the Ofala.

According to him, many dignitaries were expected to grace the occasion, including various state governors and candidates of various political parties.

Michael Ehumadu, Globacom Regional Sales Manager, Enugu said: “We are greatly delighted to be part of this year’s Ofala Festival celebration, especially after the Covid-19 pandemic prevented us from holding the festival in 2020 and 2021.”

According to him, since the company signed the Memorandum of Understanding to be the major sponsor of the prestigious event in 2011, it had always looked forward to partnering with the Palace and the Festival Planning Committee to ensure each year’s edition outstrips the previous year in grandeur and style.

“This is not just because of our commitment to preserving our rich cultural heritage, but it is also driven by our belief in the huge potentials of Ofala and other important festivals in boosting our tourism and travel industry,” he said.