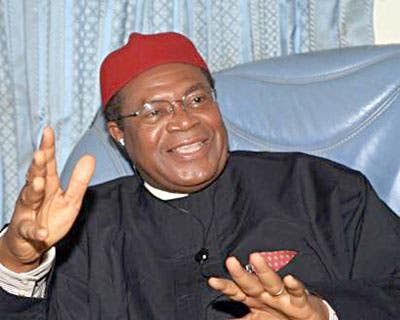 Former Governor of Enugu state, Chief Okwesilieze Nwodo has condemned the denial of the Igbo Presidency by the All Progressives Congress, APC, and the opposition Peoples Democratic Party, PDP.

Nwodo who spoke with Vanguard noted that Igbos will not remain political slaves serving other geo-political zones in Nigeria.

The former national chairman of the People’s Democratic Party, stated this while reacting to the emergence of Peter Obi, ex-governor of Anambra state, as the presidential candidate of the Labour Party, LP.

According to him: “Igbos will not remain political slaves serving other geo-political zones in Nigeria. I know that politics is dynamic. This is a period of political alignment and re-alignment for the Igbo politicians so that our common interest can see the light of the day.

The one that is most promising is Mr. Peter Obi, of the Labour Party. Dumebi Kachikwu, the younger brother to the former Minister of State for Petroleum, Ibe Kachikwu, also secured the ticket to the African Democratic Congress. So, if we do not get anything from APC and PDP, we can get something through other political parties.

“So, this is a period of negotiations, alignment and re-alignment. The Igbos will not just give up like that. We are not happy about how we were treated by APC and PDP, but the game is still on, it is not the end of it yet. I am happy that we have alternatives to remain relevant in Nigerian politics.

“For those of us who have been campaigning for the southeast presidency, we are not happy that some of our leaders in PDP and APC didn’t join in this struggle. If you are talking about two PDP Governors in South East who campaigned for South-South aspirants, what about the Senate Majority Whip, Orji Ozor Kalu,  and Governor of Imo State, Hope Uzodinma, who campaigned for Ahmed Lawan, when we had strong aspirants from South East in their parties? Our Igbo political leaders didn’t do well this time, especially when they knew that it was the turn of the southeast to produce a president for the country in 2023, “