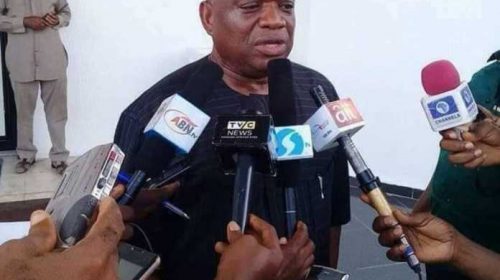 Former Abia State Governor, Orji Kalu , who was sentenced to 12 years in prison for fraud, was seen asking prison warders, “ where are you taking us to?” After his sentencing.

Kalu , who is the Senate Chief Whip also begged the prison warders not to handcuff him in public.
The former governor, who appeared shaken, said, “Where are you taking us to now? Please don’t handcuff me. I will follow you.”

Kalu ’s associate, Udeogu , was sentenced to 10 years in prison while the company which was used in perpetrating the fraud, Slok Limited, was ordered to be wound up by Justice Idris Mohammed.

Meanwhile, Kalu expressed disappointment on the court verdicts saying “I feel used” as uncontrollable tears kept running down his cheeks,

Prof. Itse Sagay (SAN), the chairman of the Presidential Advisory Committee Against Corruption (PACAC) has hailed the All Progressives Congress, APC over the court verdict on ex-governor of Abia state, Orji Uzor Kalu.

Justice Mohammed Idris convicted Kalu on 39 counts of N7.2 billion fraud and money laundering preferred against him by the Economic and Financial Crimes Commission.

Reacting, Sagay said Kalu’s conviction had proved wrong those accusing the ruling APC of protecting corrupt politicians under its party from being prosecuted.

Speaking on the conviction of Orji Uzor Kalu, Sagay called on those making claims that APC members have immunity from being persecuted to apologize to President Buhari and the APC.

According to him, those claims made by the opposition can be considered as ‘Hate Speech’.

He said: “All those who have been saying that if you should join APC, you are covered by some immunity for any corruption or wrongdoing and nobody can touch you have been proven wrong.

“From what has happened in the case of Orji Kalu, we can consider what those people are saying as hate speech.

“By saying that, what they are doing is creating prejudice, anger, and displeasure against the APC government for no just cause.

“I think they should apologize to this government and to the party for their unbridled and irresponsible opinion on this matter.”