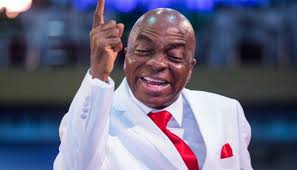 Presiding Bishop of Living Faith Church Worldwide, David Oyedepo has dared the Federal Government, saying that he cannot be alive to witness a minister removing a board trustee and close the accounts of the church.

He rejected the newly amended Company and Allied Matters Act (CAMA) Law, saying the church is not a club and neither should it be mistaken for a company for the minister to have the power to remove a board trustee or shut the accounts of the church.

Oyedepo, during his service in Canaanland on Sunday, warned the Federal Government not to try what they were planning to do to the churches, saying that Nigeria is going too far.

“To appoint Board of Trustees! You’ll appoint an Occultist to be Manager of Church Affairs? When this crude prophet is alive? When all the sons of the Prophet are alive? May I say this sir, the Church is not a club and should not be mistaken for a company.

“Who was Paul persecuting? The Church! Who said, “I’m the One you are persecuting?” Jesus! This country is going too far and it’s a risk. I saw something on CAMA (Company Allied Matters Act) and they put religious bodies there that Registrar-General can remove Trustees without recourse to the court. Don’t try it!

“It must be somebody dreaming somewhere who woke up on the wrong side on the bed that carted that thing into the middle of it as their custom is. I’m 51 years young in this thing, I’ve been with Jesus for some time and I’m sent as a Prophet to the nations; don’t try it,” he warned.

According to Oyedepo, “That a Minister can remove a Trustee and close the accounts of the Church: when the history of this time will be written, many will be ashamed to be Nigerians except the Church.

“You don’t know somebody’s strength until you touch his wife. The cheapest way for a leader to lose his respect is to insult the wife of his staff; he will say, “take your job, my friend, I’m a man.”

“The cheapest way for a man to lose respect is for a man to mess up with the wife of his staff: “I even thought you are a responsible man, big fool, how dare you!”

“You will be begging him: “beg me for what? He will kick him” because you have touched his sensitive part.

Please know that the Church is the Bride of Christ, we are returning Home someday for the Big Marriage Supper of the Lamb.”

The man of God said it was wisdom to quickly expunge religious bodies from that document, as it was only safe to remove, adding “that where the Registrar General is superior to the court, including the Supreme Court! Where a supervising Minister can wake up in the morning and say, “why are they going to Church early in the morning, they can’t go to church anymore?”

“Can you appoint Board of Trustees? In fact, they said, they will appoint manager, so you appoint an Occultist to be Manager of Church Affairs when we are alive? When this crude prophet is alive? When all the sons of the Prophet are alive? Don’t try it. Timely advice.

“Sir, we are only looking like the same, we are not the same. Every child of God is redeemed as a peculiar citizen of the earth. You don’t know how peculiar we are until you go beyond your bounds (speaks in tongues). You don’t understand that language, it is a family language.

“You can’t decipher it. It’s a confidential communication link with the Heavens. We call the angels by name to deal with people, praise God. Hallelujah. All the machinations of that evil are hearing me now and if they don’t hear, they will tell them: those who hear will tell them.”