A statement issued by WAEC’s Head of Public Affairs, Demianus Ojijeogu, urged candidates to disregard other timetables in circulation.

According to the statement, WAEC, Nigeria wished to inform its stakeholders-schools, parents, and candidate-that the Final International Timetable for the conduct of WASSCE for School Candidates, 2020 had been released. 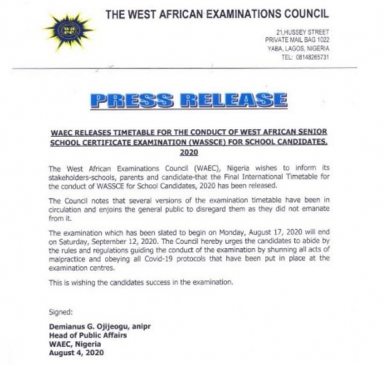 The Council noted that several versions of the examination timetable had been in circulation and enjoined the general public to disregard them as they did not emanate from it.