The Rivers State Police Command has exhumed four decomposed bodies of kidnapped victims from a septic tank in the State.

The police also paraded a man suspected to be a serial killer who specialized in abducting and killing his victims in Umuebele Igbo-Etche, Etche Local Government Area of Rivers State. 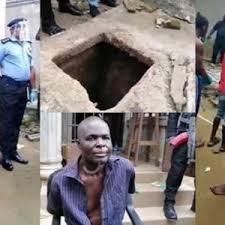 Some victims whose bodies had fast decomposed with only skulls remaining were exhumed by a team of policemen led by the Rivers State Commissioner of Police, CP Joseph Mukan, in the suspect’s compound in Umuebele, Igbo-Etche in Etche local government of Rivers State.

The entire operation that lasted for a few hours is like a horror movie.

The suspect, simply identified as Anthony Ndubuisi, who hails from Imo is a father of four children and lives in an expansive land where he pretends to be a dealer in shoes in the Oil Mill Market in Port Harcourt, as well as also practicing shoe-making.

He was paraded before journalists in his home in Igbo-Etche.

He confessed to the heinous crimes and also disclosed that he has since abducted and killed four victims since he started the trade in February this year.

He also showed journalists the septic tank where he deposed off the dead bodies of his victims.

When asked how he lured his victims, he said they were majorly his shoe clients who supplied him with shoes to sell.

He said he first struck them on their head and then strangulated them.

According to Ndubuisi “I am a shoemaker. I stay in Garrison with my wife and children. My wife is not aware of what I do. Only I stay in this house (in Igbo-Etche).

“I started killing this February. I have kidnapped and killed four since I started. I kill them by holding them on their neck. I tell them I want shoes to sell and they come to my house,” he said.

Residents within his neighbourhood claimed that the serial killer might have been able to carry out his nefarious activities undetected because the road leading to the community was in a deplorable and inaccessible condition.

They pleaded with Governor Nyesom Wike to come to their aid by reconstructing access roads to Igbo-Etche so that their community, which has over 70 crude oil wells would not continue to be a hideout for kidnappers and killers due to bad roads.

Mukan told journalists at the scene of the crime that the breakthrough that led to arresting him was “through intelligence-tracking policing. We were able to get him. He is a blood-thirsty serial killer who we believe is not working alone.

“The serial killer demands and collects ransom but still kills his victims. He is yet to disclose the amount of ransom he collects. We believe that he is not acting alone. We will track his accomplices. He is a father of four, three girls and one boy.” – The News.