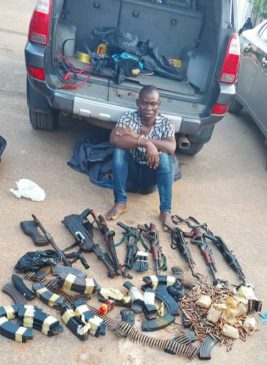 The police have arrested seven suspects, including serving and dismissed soldiers, for the alleged attack on a bullion van that leads to the death of four policemen in Ebonyi State last week.

The bullion van was attacked on July 29 on its way to Enugu State, and the suspects were arrested by operatives of the Inspector-General of Police Intelligence Response Team (IRT). Recovered from the suspects were explosives, one GPMG, six rifles, 51 AK-47 magazines, 1,620 rounds of ammunition, two vehicles, breaking instruments, and charms.

A police source disclosed yesterday that: “During a serious manhunt by IRT detectives with technical intelligence support from TIU, one Alfred Robinson, aged 45, was arrested on August 1, with arms and ammunition recovered from him.”

“The suspects, upon interrogation, confessed to the bullion van robbery in Ebonyi State, where four policemen were killed and many other armed robberies/kidnappings across the south-east and south-south regions. The suspects also confessed that four out of the rifles recovered belonged to the policemen they killed during the robberies. The suspects are assisting the police with information on how to arrest other gang members who are on the run.”