A Winner’s Chapel deaconess, Mrs. Iyema Oyemola Oyewole has been arrested after she allegedly subjected her ward to a series of brutal torture that has shocked Nigerians.

The 14-year-old girl named Princess lived with her parents in Kaduna until they were displaced by bandits following an attack on their community. As a result, Princess’ parents had to place their daughter in the home of Mrs. Iyema Oyemola Oyewole, a deaconess of Living Faith Church in Barnawa, as they didn’t want her to be homeless.

While at the deaconess’ home, Princess was allegedly subjected to torture from the deaconess and from her children while the husband allegedly turned a blind eye. 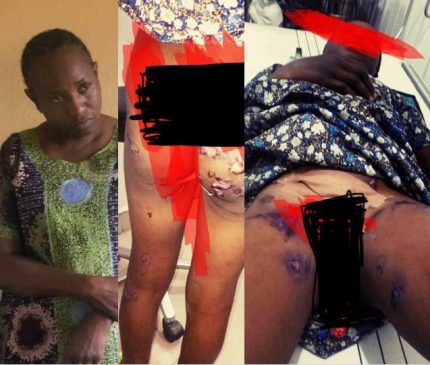 It was alleged the Princess was stopped from going to school. She was also made to sleep in the toilet and she had to drink water from the toilet when thirsty. In addition to all that, she was beaten frequently.

According to reports, the deaconess’ son punishes Princess and beats her at will, sometimes under the rain. It was also alleged that the daughters of the Deaconess Help hold Princess whenever their mother wants to torture her.

Reports have it that the Deaconess Iyema tortures the girl by putting a knife on fire till it’s hot before using it to burn Princess all over her face.

It was alleged that the Deaconess also burns the girl’s vagina with lighter and sometimes inserts a hot stick into her vagina while her daughters help her hold the girl’s legs open. Afterward, they would allegedly apply pepper to her vagina.

Mrs. Iyema also allegedly refused to let the girl’s parents see her each time they tried because she didn’t want them seeing the injuries on her body. Whenever Princess’s parents showed up, she told them they couldn’t come in because of Coronavirus.

READ  FG Issues Travel Ban On US, UK, 11 Other Countries Over Coronavirus

Eventually, Princess’s father became suspicious and got the NGOs involved. They were shocked at the state they finally saw Princess in. 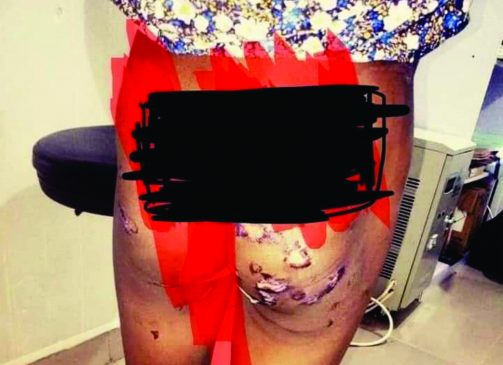 THE STORY OF PRINCESS VS THE DEACONESS IYEMA…

The picture of the girl here is that of a young Princess. She is fourteen years old from Kuturah in Kajuru Local Government Area of Kaduna State. Her father moved his family to Kaduna town when the neighboring village was attacked by the forces killing our people.

You should know that in Southern Kaduna we have over fifteen thousand internally displaced persons, and since they don’t have a camp, those in the city centers have accommodated these people and are still doing that.

Mrs. Yemi Awolola whose picture appears above is a Refinery Staff. She is also a Church Deaconess with the Living Faith Church Barnawa. She has five children.

Mr. Oyewole begged for Princess to come and stay with them. The father single-handedly gave the girl to the woman. The woman even used holy water when he handed his daughter to the woman. He thought she was a good Christian woman. A month later, he called to speak with his daughter; the woman said he must speak with her in English and not Hausa. She knew the daughter would likely spill.

She would now put the girl on the speaker to monitor her. Meanwhile, the girl was sleeping in the toilet all these while with not even a wrapper. The woman gave her a cup and told her that whenever she’s thirsty she should fetch water from the toilet to drink.

READ  Buhari Can No Longer Pretend About Insecurity – Gbajabiamila

In the interview video clip, you’d hear the girl say, “They would now give me leaves like an animal” while in the toilet before the girl would come out to work her ass off.

The father said, “I did not collect or want any money from the woman. All that I wanted to be was for my daughter to go to school.” But in reality, for the past one year, Princess has gone to school just a week.

When asked, why did you go to school just once? And she replied, “The woman opened my bag one week after I commenced school and saw a carrot that I had put inside to eat during break and beat the living daylight out of me. Since then she stopped me from going to school…”

Check the scars on her face? The woman puts a knife on a burner or stove and when it’s hot, she would place it on her face. Her face used to be very swollen.

When the mother refused to leave, she opened the gate for her and let her see the daughter from the gate of the house. She told her, “You can see your daughter is alive right? Now leave my house!”

When the girl’s father was told of the inhumane treatment, he then realized that something was wrong. He made contact with the relevant people on how to get his daughter back but every effort proved unsuccessful. The woman told them that the girl was in Abuja.

On Monday, the Uncle to the girl called the woman and warned her that she had just six hours to return the girl and here we are today.

It was then she started treating the girl with iodine and ice to dry up the wounds.

Mrs. Oyewole has a son who beats Princess at will, punishes her even under the rain. When all of these happens, the husband locks himself in his room and pretends like nothing is happening.

Her children Tito and Nifemi would hold the girl’s neck while the mother would burn her buttocks and vagina with lighter.

While at the deaconess’ home, Princess was allegedly subjected to torture from the deaconess and from her children while the husband allegedly turned a blind eye.

They hold her down while the mother inserts a stick into her private part at the same time burning the vagina. They also put pepper in the vagina and over the wounds.

When asked at the police station, why did you treat the girl so, and she replied, “I didn’t know the fire was burning very well like that!”

Her Church had settled the matter. But luckily, Alheri Magaji and the rest have got other NGOs involved.