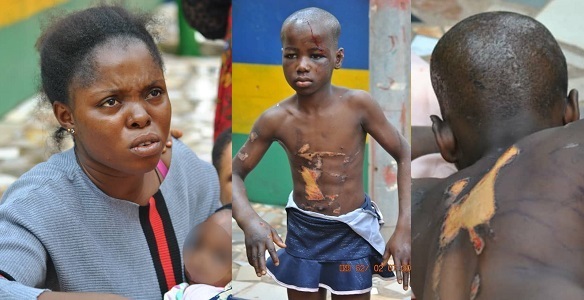 A Woman, Mrs. Ifeoma Ezeugwu has been arrested by the police in Enugu state for drilling nails in two places into the head of an a-10-year-old girl, Miss Chinonye Nnadi.

The woman also allegedly used hot electric iron all over the body of the teenage girl.

The offense the abused committed was carrying Madam Ifeoma’s little baby around 12 am in the midnight and sleeping off. So, the baby fell off her hands, but without sustaining any physical injury. Swiftly, Mrs. Ifeoma used a hot iron to design her Skin, and she also used a big nail to puncture her head.

The WomenAids Collective, WACOL, who made disclosure of the incident to newsmen in Enugu described the incident as “Evil and Horrific violence on a girl-child.”

Founding Director of WACOL /Tamar SARC, Prof. Joy Ngozi Ezeilo said her office was alerted, on Friday, about the case of the ten 10 years old Chinonye, who sustained grievous bodily harm at the hands of the so-called ‘Madam’ relative that she works for as domestic help.

“This is gory and torture of a young innocent girl whose only crime is being born to a poor widow who had to give her up to live with someone in the hope that she will get an education and survive.

We pray that she recovers. “We demand full wrath of the law on this woman that inflicted such a level of physical injury on this girl. “I spoke to the distraught mother of the victim.

She is a poor widow living in a rural village in Aku, near Nsukka, Enugu state. “It is time to eradicate child labour, ban and punish heavily anyone using children as domestic help.

The Child Rights Act and the NAPTIP Act must be effectively enforced. WACOL will follow through to ensure that justice is done in this matter.”

Ezeilo appreciated Enugu residents who she said severally informed and sought WACOL’s intervention on such matters.

Meanwhile, The Enugu State government has promised to take adequate care of the wellbeing of the 10-year-old female househelp, Miss Nneoma Nnadi, who was grievously injured and maltreated by her guardians, Mrs. Ifeoma Ozougwu and her husband, Mr. Jude Ozougwu. The state government also promised to offset her medical bills and ensure that she receives adequate medical attention.

It was reported that the woman and her husband, Mr. Ozougwu, who reside at Thinkers Corner, Enugu, and hail from Aku in Igbo-Etiti Local Government Area, inflicted various degrees of injuries on the little child, which prompted their arrest by the Enugu State Police Command, and rescue of the victim – who is now receiving treatment at the ESUT Teaching Hospital, Parklane, Enugu.

Hon. Nnaji, who was accompanied by the Chief Medical Director of ESUT Teaching Hospital, Parklane, Enugu, Prof. Hycienth Onah, to see the abused child, empathized with the victim and her immediate family and promised them that the state government will not take the matter lightly.

She stressed that “we can never sweep it (matter) under the carpet”, pointing out that the dastardly act undermined the Child Rights Act “His Excellency, Rt. Hon. Ifeanyi Ugwuanyi’s administration spent millions of naira, time and energy to enact in the collaboration with UNICEF, to make sure that every child in Enugu State is protected, given education, healthcare, and right to life, among others”.

According to her, “Enugu State government is not taking this lying low. The state government will take care of all the medical bills, facility, and everything concerning this girl”.

Expressing shock at the ugly experience the traumatized little girl encountered in the hands of her guardians, Hon. Nnaji thanked the neighbours for bringing the cruel incident to the public domain, describing them as “Good Samaritans”.

Responding, the mother of the victim, Mrs. Nnedinso Nnadi, expressed gratitude to Gov. Ugwuanyi for the state government’s concern and intervention, disclosing that it was a traumatic experience for the child and the entire family and asked God to reward all those who have played roles towards the rescue and treatment of their child.

In his remark, the Chief Medical Director of ESUT Teaching Hospital, Parklane, Enugu, Prof. Onah, explained that the victim is responding to treatment and taking care of adequately, adding that “her chances of a full recovery are high”.