…We were scared of Lucifer, Church of Satan founder — Residents

… Why Church Of Satan Was Demolished

The Assemblies of Light Bearer Greater Church of Lucifer popularly known as the Church of Satan in Ebem Ohafia, Abia State has been destroyed by youths of the community.

It was alleged that the founder of the church identified as Ifekwe Udo a.k.a Lucifer or Fada-Fada became popular in the past quarter of the decade, for his visible effort in providing employment opportunities for the jobless youths of the community.

It was reviled to Waka About Africa that he gives the jobless youth motorcycles on hire purchase and also opened up a brothel in the community.

Ifenkwe was reportedly arrested for ”violating the lockdown order, child trafficking and terrorizing  Ebem Ohafia community.” Sources said following Ifekwe’s arrest by police personnel from the Force Headquarters, Abuja, youths from Ohafia took the opportunity to go to the Nmuri stream location of the church along the Abam-Ohafia Road, Ebem Ohafia, and destroyed it.

According to another source, men are stationed in the brothel for sex-starved women and men to go and find comfort. The alleged atrocities, sources said, made the youth of the community to destroy the satanic images outside the church.

Our team gathered that the residents of Ebem, Ohafia town where the Church of Satan was located, have expressed their joy following its demolition by irate youths, claiming they were afraid to confront the founder because of alleged possession of evil powers that could kill anyone who challenged his activities.

READ  For The Records: Why Rev Fr Magnus Ebere And His Canaanland Adoration Ministry aka E-Dey Work Is Banned In Ahiara Diocese

The Church was founded by Ifekwe Udo, he was alleged to have converted some youths of the area to his church by assisting them with motorcycles for commercial business (Okada) and other forms of empowerment.

Ifekwe, also known as Lucifer, was also said to have continued terrorizing the Ohafia community as no one dared to challenge him. It was observed that “everyone in Ohafia knew Ifekwe Udo did not mean well for the Ohafia community with the nature of activities he was involved in.

He was a bad influence on the community, especially to the youths. Some of the youths started joining him because he was empowering them with motorcycles for Okada business. There are reports that he used charmed (juju) on his followers.

He also established a brothel in the community. However, nemesis caught up with Lucifer as he was arrested by the Police in the state for violating the protocol on COVID-19. 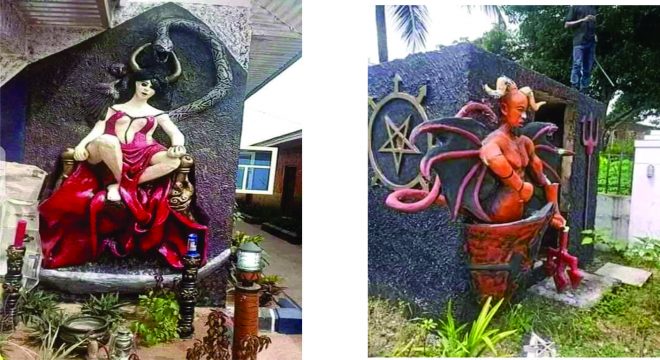 Following his arrest, youths of the community summoned courage and stormed the church demolishing the various images located in the compound.

This made the Ebem community erupt in celebrations as the various graven images were being demolished.

An indigene of Ebem, Ohafia in Ohafia Local Government Area of Abia gave reasons why the youths of community demolished the Assemblies of Light Bearer Greater Church popularly called Church of Satan founded by one Udo Ifekwe.

The indigene, a witness to the demolition, who spoke to Waka About Africa in conditions of anonymity, said the Founder, Udo who has been arrested by security operatives from Abuja, the Federal Capital Territory (FCT), has been involved in series of rituals, devilish initiations and kidnapping in Ohafia and its environs before his arrest on Tuesday, July 7, 2020.

Ifekwe also known as Fada-Fada initially started by providing employment to some jobless youths, the

Ifekwe Udo is being tried for his alleged involvement in the burning of the Ohafia Police Station on Sunday, April 19, 2020, by some youths in the community.

The state Commissioner of Police, Jane Agbede, confirmed that Udo and others were facing trial over the incident and the destruction of the Divisional Police Officer’s quarters as well as high and magistrates’ courts.

According to another source, men are stationed in the brothel for sex-starved women and men to go and find comfort. The alleged atrocities, sources said, made the youth of the community to destroy the satanic images outside the church.

Eze Ujurueze confirmed the report and stated that the police from Abuja arrested Udo on the grounds that he was involved in the recent burning down of the Ohafia Divisional Police Station and other government institutions, including courts.

The monarch stated that already, the Ebem community and the entire Ohafia clan had banished him.

READ  Men of God & the Will of God in Nigeria

He said Udo was first taken to Abuja, interrogated, and returned to Umuahia, where he is currently facing trial.

When asked for details of the trial, the state Police Public Relations Officer, Geoffrey Ogbonna, said the case was no longer under the command and he could not comment on it.

On Saturday, April 18, 2020, a 19-year-old school leaver, Friday Ifeanyi, of the Eni Njoku Road, Ebem Ohafia, was shot dead by a policeman.

Early the next day, angry youths went on the rampage, destroying and burning down the Ohafia High Court, Magistrates’ Court, three police patrol vans, the DPO’s quarter, and the police barracks.