The former governor was buried at 10:20 am according to Islamic rites at his Oluyole residence. 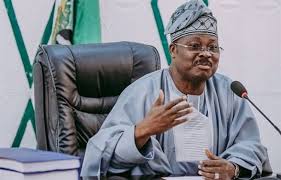 The remains of the ex-Oyo State governor, Senator Abiola Ajimobi, was on Sunday laid to rest in Ibadan, the state capital. The former governor was buried at 10:20amaccording to Islamic rites at his Oluyole residence. The burial, which was only attended by his wife, children as well as very close associates, held around 10 am. Present at the burial were APC gubernatorial candidate, Chief Adebayo Adelabu, Hon. Shina Peller, Hon. Saheed Akinade-Fijabi, Representative of Ekiti State governor, Senator Teslim Folarin, Minister of Youth and Sports, Mr. Sunday Dare, and members of the 8th Assembly. Ajimobi died on Thursday 27th of June, 2020 at the First Cardiology Hospital in Ikoyi, Lagos, as a result of Coronavirus complications.

Between Ajimobi And Governor Makinde 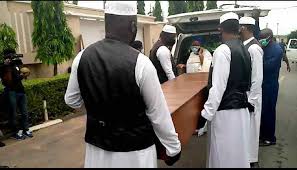 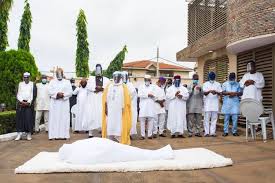 Ajimobi, 70, who died recently, is believed to have had a frosty relationship with Makinde since the latter succeeded him as governor of Oyo in 2019. Florence, the widow of the ex-Oyo State governor, Abiola Ajimobi, has accused the administration of Seyi Makinde, the incumbent governor of the state, of abandoning her family during her late husband’s illness and death.  As a result of that strained relationship, it was alleged that the Oyo State Government refused to allow Ajimobi to be buried on land under contention between the two parties.  Recall that in February 2020, the late Ajimobi sued Makinde over the revocation of his landed property at Agodi Government Reservation Area in Ibadan after the state government claimed the property violated the land use act. Ajimobi had stated the land was donated to him by ‘Alhaji Alao’ and was legally acquired by him through the relevant government agency. It was in the course of that battle that Ajimobi took ill and eventually died.
Florence, Wife Of Ajimobi, Accuses Governor Makinde’s Administration

In a video that has since gone viral, Mrs. Ajimobi revealed that during her late husband’s ailment, none of the current Oyo State officials called her or checked on the family. She said, “The Government of Oyo State cannot call me or send a condolence message. “Governor Makinde never called me, I don’t know if I have to send an official letter to the government to announce that my husband was ill.“I never sent to Governor Fayemi, Governor Ganduje, or others. “Even you the deputy governor, sir.” Olaniyan quickly interjected to say he called her mobile number a few times but that she didn’t respond. Cutting in sharply, Mrs. Ajimobi said, “You should have sent me a text message. “I don’t have your number, I can’t pick up, I’m the wife of a politician, I don’t pick numbers I don’t know, you could have sent me a message, sir.“Everybody is going to die. My husband is dead “My husband is dead and he served this state for eight years, what are we talking about.”
Bolaji Tunji Ajimobi’s Spokesperson Also Reacts

The seeming bad blood between the grieving family and administration of Governor Makinde took a new twist,  when the spokesperson for the late Ajimobi, Bolaji Tunji, accused the Oyo State Government of not according to his late principal the respect he deserves. In a few lines that perhaps expresses the reasoning of the family, Tunji said, “Any attempt to spin falsehood against the Ajimobi family will not fly. We know what we know.  “If as you claimed that you could not get through my calls, what stops you from sending a text. That would exonerate you. No one should play politics here. “Flags at half-mast for a day? Nonsense. After eight years of service. Even for each of the terms would give you two days. It is the least you could have done.

“So what stopped an obituary advert in the newspaper,  or you could not get in touch with the newspapers too? Foolish, irrational excuse. Those excuses will not fly, you cannot now start to whitewash what is not,” Bolaji said.

Governor Makinde said his administration broke the law to allow Ajimobi’s burial at a Government Residential Area. The governor says his administration went against the established land use rule in Oyo state to give approval for the burial of Abiola Ajimobi, former governor of the state, at his Oluyole Estate residence.  “In view of the intense inquiries regarding the perceived delay in burying the late former Governor, Makinde decides to place on record that there was no truth in the rumor that the burial was delayed by the state government. Saying, Seyi Makinde, had played no role at all in causing any delay whatsoever regarding the burial of his immediate predecessor, Senator Ajimobi. “The truth of the matter is that the family, through a proxy, approached the state government and sought approval to bury the late governor on a plot of land at Agodi GRA, which is currently under litigation. Incidentally, it was the same former Governor Ajimobi who instituted the legal action. “Governor Seyi Makinde had no choice than to state the facts as they are to the emissaries and turn down the request. “Governor Makinde, however, against the established land use rule in Oyo State, gave approval that the family can bury the late governor in his Oluyole Estate residence. “It is to be noted that the rules guiding land use in Government Reservation Areas (GRA) forbid the burial of bodies in such locations as Oluyole Estate and Agodi GRA. The governor noted that the family did not follow the laid down protocols in passing information on the sickness and eventual demise of  Senator Ajimobi, Governor Makinde overlooked all that and directed the full cooperation of the government with the family on this matter. “It can only amount to a wicked lie to insinuate that the incumbent government in Oyo State attempted to obstruct the burial of the immediate past governor”, Makinde said.

How Ajimobi, Was Defrauded Of N50m 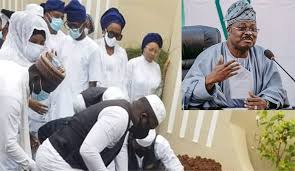 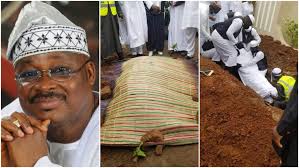 After Dispatching, Private Jet To Fetch Fake Drugs From Bangladesh Subsequently, a jet and N50m was dispatched to the Asian country for the purchase and delivery but sadly the drugs procured by the Nigerian man was all fake. The last days of former Oyo State governor, Abiola Ajimobi, were devoid of peace as he was defrauded of N50m right on his sickbed. Ajimobi was rushed to the hospital weeks ago after his health deteriorated significantly and soon slipped into a deep coma he never recovered from until he passed away. In the period doctors were battling to save his life at the Lagos hospital, family members desperate to keep him alive reached out to a handful of Nigerians they knew abroad to help get a sizeable quantity of Remivir to be administered on him. Manufactured in Bangladesh, the antiviral drug was previously tested in humans with Ebola virus disease and has shown promise in treating severe acute respiratory syndrome (SARS) caused by Coronavirus, according to the United States National Institutes of Health. First, the assignment for the search for the drug was given to a Nigerian in Texas, United States, to see if he could help get it. After days of contacting several trusted persons for the ‘project’, he gave up the search as the tight monitoring of the drug by the US government made it almost impossible for it to be moved out of hospitals. The $50,000 paid was returned after another search for the drug in a hospital in Los Angeles, California, did not also materialize. The hospitals contacted had only a limited dose of the drugs, which is closely monitored by the US authorities desperate to stop the rising number of deaths related to Coronavirus. After failing to get the drug in the US, members of the Ajimobi circle turned attention to Bangladesh where it is being produced. A Nigerian assured them of getting the needed quantity of Remivir to administer on the ex-Oyo governor and help save his life. Subsequently, a jet and N50m were dispatched to the Asian country for the purchase and delivery but sadly the drugs procured by the Nigerian man were all fake. He pocketed a large chunk of the money and left the former governor to battle for his life at the Lagos hospital where for at least one week he was on a life support machine before he eventually died.  In fact, we gave $50,000 to one of our Nigerian guys who is a doctor in Los Angeles but he returned the money. He said the hospital had only 100 doses and everything was monitored on how it is used. “But one Nigerian guy defrauded them after claiming he could get it in Bangladesh.”They sent a flight and paid about N50m but the drug they got from him was fake,” It was gathered that the disappointment from that development further added to the pain of those close to the former governor, who passed away at the age of 70.

READ  Shock, Fear As Herdsmen Caught With Sack Of Bullets, Invaded A community In Imo