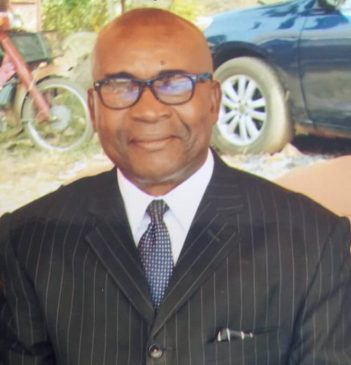 Dr.G.A.Onuoha, LL.M, Ph.D. (UNN) is a maverick lawyer, an International and Jurisprudence Lecturer in the Faculty of Law University of Nigeria. He graduated from the prestigious University of Ife now Obafemi Awolowo University (OAU).  He earned his Ph.D. from the University of Nigeria and has published extensively in the area of maritime law. Barr Onuoha is a household name in public service, philanthropy, and legal matters in Nigeria and in every respect a legal luminary. With some of the most flourishing career profile to flaunt Dr. G.A. Onuoha in this chart with Waka About Africa on the issue of excessive borrowing by the federal government.

Dr. Godwin Onuoha who reacted on the recent statement made in one of the dailies, by the Minister of Transport Rotimi Amaechi:  “We are about applying for another $3b Chinese loan”,  Amaechi said.

According to Dr.G.A.Onuoha, LL.M, Ph.D. (UNN), this is coming on the heels of all the previous ill-advised borrowings by this same Buhari Federal Government – continuous borrowings whose dusts of controversy are yet to subside.

When Waka About About inquired from Dr. Onuoha on his view concerning the excessive borrowing by the FG,  this is what he said,  “the government of President Buhari would have created Ministry of Borrowing “this is government by borrow -borrow designed to destroy Nigeria’s future! What is really going on? With all our earnings – locally and internationally! This Federal Government should have formally created a Ministry of Borrowing with Chief Chibuike Rotimi Amaechi in charge! Can any modern and people-oriented government be run by borrowing? Borrowing from left, right and center” He said.

READ  Buhari Appoints Adeniran As Surveyor-General Of The Federation

He said Nigeria is now a perfect candidate for the next Chinese take-over of national sovereignty! You should ask yourselves certain vital questions – why did Chief Chibuike Rotimi Amaechi, Nigeria’s Transport Minister, beg the National Assembly not to read or probe into certain ominous or dark clauses that obviously compromise Nigeria’s sovereignty in that Rail Construction Agreement with China.

Why did Minister Amaechi beg the National Assembly not to tamper with a critical clause that gave Nigeria away as a potential colony of China should Nigeria default in repaying the loan, what is his special interest in giving away Nigeria’s sovereignty.  And why are Minister Amaechi and his cohorts in this Federal Government in a great hurry to just borrow and access the Chinese funds – Billions of U.S. Dollars – without proper legislative scrutiny, Dr. Onuoha asked.

Dr. Onuoha doubts whether FG knows,  “if God knows if we are still an independent, sovereign country even as we speak judging by the tenor of numerous secret so-called “Bilateral Agreements” this Federal Government has signed not just with China alone, but with some other countries in its blind desperation to secure international loans”.

He advises The National Assembly of the Federal Republic of Nigeria to seriously take up this very critical issue that has to do with our independence and sovereignty as a country and find out the extent of this borrowing madness that potentially compromise Nigeria’s sovereignty and future.

“Nigerians are waiting for the National Assembly – whose constitutional duty it is – to kick-start the process of saving this country from these executive excesses before it is too late. If the National Assembly fails to act and save this country from this potential neo-colonialism and concomitant future slavery, then we may end up like a number of some East African countries that are now effectively Chinese colonies or politico-economic dependencies or appendages in Africa”.

The governments of those countries had earlier, by these types of “Bilateral Agreements” sold away from the sovereignties of their countries to the Chinese. We should realize by now that regardless of Chinese protestations of “love” for Africans, Nigerians inclusive, there are no free lunches anywhere with these international “donors” and economic superpowers like China, USA, Russia, the European Union, World Bank, IMF, etc, etc. Furthermore, the National Assembly should invite all the Ministries and Agencies of the Federal Government involved in this borrow-borrow madness, to explain to Nigerians what the hell is going on and whether we all are running away to paradise with these ominous, dangerous and destiny-mortgaging loans being secured left, right and center by this Federal Government. Finally, what and what have we achieved with the loans already secured? Nigerians are waiting for answers to these crucial questions that must NOT be swept under the carpet!! He concludes.