Because of the principles of cause and effect, for everything in life, there’s a cause. The failure of the current regime has a cause, just as the success of the Imo PDP RebuildImo administration also has a cause. 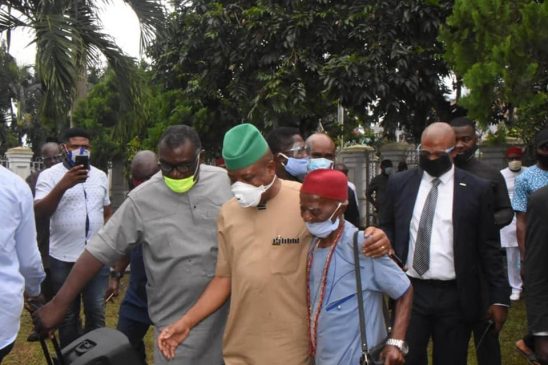 In this short essay, I’ll present in summary, some of the salient causes of the success of the Imo PDP RebuildImo administration in its seven-month tenure in Douglas House.

First, there was the will to succeed. It manifested in a well-articulated vision of what it wanted to do, why it wanted to do it, where to do it when to do it, and ultimately, how to go about doing it.

Recall that before its victory in the 2019 gubernatorial elections, Imo PDP had been in opposition for eight years at least, having been in power for cognate twelve years. It wasn’t docile, but very much active in politics all through those years in opposition!

Experience is the best teacher. Practice makes perfect. Imo PDP by virtue of experience and practice has almost gotten perfect with the working and running of party politics and government. Imo is PDP and PDP is Imo!

Unlike most opposition political parties, which close shop at the end of each election, Imo PDP keeps the doors and windows if its shops are wide open after each election.

With its sweet victory in the 2019 guber election, Imo PDP unfolded its vision of rebuilding of the grossly devastated Imo State and Imo people. Hence, its own was “RebuildImo administration”!

Imo PDP, together with its candidate, governor-elect, and later governor, His Excellency, Rt. Hon. Emeka Ihedioha CON brought together the best among the best brains, intellectuals, technocrats, and professionals in the State in what was dubbed: “Transition Technical Committee” (TTC).

The TTC eventually, after about six weeks of brainstorming by the corpus of the extremely respected think-tank, produced the roadmap for the rebuilding of Imo State. That roadmap has variously and severally been described as “compass”, reference points”, “guidebook”, “dictionary” and even “encyclopedia” of practical government and governance delivery.

The TTC was Chaired by Mr. Ernest Ebi, former Deputy Governor of the Central Bank of Nigeria (CBN), with Amb. Dr. Mrs. Kema Chikwe, former Minister and former Ambassador of the Federal Republic, as its Deputy Chairperson. It had members from virtually all fields of human endeavors.

It’s probably very convenient to say that the secret of the success of the Imo PDP and Ihedioha’s RebuildImo administration in seven months had its taproot in the compendium of the step by step modalities for the working and running of the government as crafted by the TTC.

Of course, that doesn’t mean that just anybody that’s handed the TTC compendium must succeed with it the way Rt. Hon. Emeka Ihedioha succeeded. No! Rather, it requires personal sound attributes of a good leader to galvanize, harmonize, and harness whatever ideas, guidance, and counseling that may be compiled in a book!

His Excellency, Rt. Hon. Emeka Ihedioha even before he assembled the TTC was reputed to be a man of great vision, with a very sharp cerebral brain! That’s why he saw the need to put together the TTC before he was inaugurated as Imo governor on May 29, 2019.

Also, he was appropriately equipped with practical experience in human and material management and administration. Besides being the Chairman/Chief Executive Officer of his First Page Communications business before his public service career in the House of Representatives of the National Assembly of the Federal Republic of Nigeria in 2003, Rt. Hon. Emeka Ihedioha also later became a Principal Officer (Chief Whip) and Presiding Officer (Deputy Speaker) of the House of Representatives, 2007-2015.

In his elevated offices, he was saddled with the planning, organizing, staffing, supervising, controlling, reporting, budgeting etcetera required of every good manager of human and material resources of an organization.

In fact, a presiding officer of the National Assembly at both of Red Upper Chamber and the Green Lower Chamber were severally rated on the same duty and responsibility scale as a governor and probably a president with obvious differences in scope.

To that extent, Rt. Hon. Ihedioha was ready and very prepared to be governor before he became governor. Little wonder that even without any handover notes from his predecessor on or before May 29, 2019, he hit the ground running.

And seven months after, he had remarkably impacted positively on the lives of Imo people and set the template for the true rebuilding of Imo State. That was before power and money mongers with the backing of the Supreme Court disrupted the entire process.

READ  We Crumbled Jonathan’s Government, We Can Do Same In 2023 — Almajiris

Rt. Hon. Ihedioha understands the very basic problems of Imo people and Imo State. It began long ago while he was still a national legislator par excellence when he bombarded Imo State with programs and projects. And he masterfully placed the problems in proper order on the scale of preferences. He did first things first.

He consulted well the TTC compendium, intellectuals, technocrats, and professionals, before he translated ideas into practical implementations, with desired positive results! 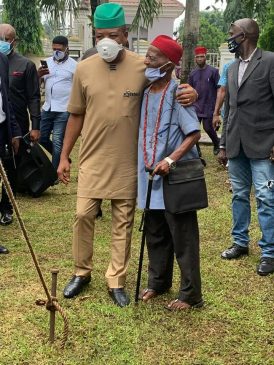 In all things, Ihedioha put integrity first. With integrity, he insisted on probity, transparency, and accountability. He then advocated and ensured respect for the rule of law and due process. He restored the Bureau for Procurement and Price Intelligence (BPPI) etcetera.

At all times, during his award-winning seven-month RebuildImo administration, Rt. Hon. Emeka Ihedioha focused forward and concentrated on the ball of rebuilding Imo at all sectors.

In order not to lose focus and concentration on the present and the future, he instituted the Committee and Commission of Inquiry system. Those were to be his eyes and focus on the past. That way while he focused and concentrated on the now and tomorrow, he also was in the know of what transpired in the past. That was ingenious!

Rt. Hon. Ihedioha visibly displayed unpretended mercy, love, care, sympathy, and empathy for the plight, welfare, and well-being of Imo people. Very often he tabled issues of how to make Imo a better place to live in.

He respectfully related very well with all segments of Imo people and society. He restored genuine respect for the traditional and religious institutions. The professional class was accorded their due rights of the place. He expressed interest and respect for women, mothers, youths, school children. Ihedioha carried everybody along in Imo State.

He paid 100% of salaries and pensions. There were no deductions. He paid contractors as agreed. He remitted fully all statutory revenues appropriately to the end-beneficiary unions like the National Union of Local Government Employees (NULGE), the Imo State Oil Producing Areas Development Commission (ISOPADEC). No stress! No complaints. No protests!

As Imo governor for those glorious seven months, Rt. Hon. Emeka Ihedioha paid contractors of all sorts agreed on contract sums as the case may be. He never owed contractors. There weren’t any protests by Imo pensioners, NULGE, ISOPADEC, or contractors to IMSUBEB etcetera. IMSU and Imo Poly were calm and delivering on their terms of reference.

Rt. Hon. Ihedioha restored the Local Government system and got it functioning properly like the third tier of government in Nigeria without adulteration.

Joint Account Allocations Committee (JAAC) meetings were held stipulated by law between the State Government and the Local Governments.

READ  Ashawo Work Na Work’ – High Court Rules That Prostitution Is Legal in Nigeria Ordered N100,000 Compensation To Each Of The Applicants.

The results included the commencement of the construction of 27 mini-stadiums and 27 Administrative Secretariats in the 27 LGAs. The Secretariat at Ahiazu Mbaise LGA was Commissioned in December 2019 by Governor Ihedioha. Also, 2700 (4×1) desk and seats furniture were constructed for schools in the 27 LGAs in collaboration with the Imo State Universal Basic Education Board (IMSUBEB) project. 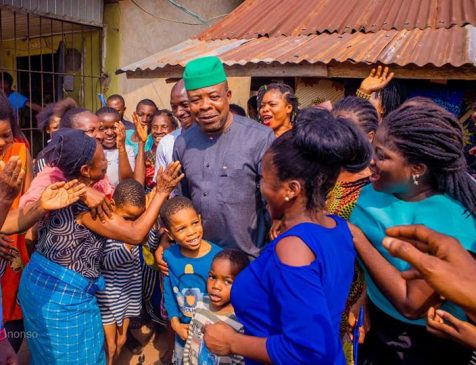 There’s the argument that had the story not changed for the negative, Imo State would today have been boasting of 27 mini-stadiums and 27 Administrative Secretariats. More thousands of school desks and chairs would have been constructed and distributed among public schools in the State.

Not to forget that Governor Ihedioha introduced the “clock-in, clock-out” staff attendance register at the 27 LGAs to check against absenteeism, truancy, and ghost workers!

Rt. Hon. Emeka Ihedioha ensured that counterpart fundings were paid and donor organizations returned to the State. That culminated in the restoration of water supply and the commencement of the construction of 380 kilometers of rural roads via the Rural Access Mobility Project (RAMP).

The Treasury Single Account (TSA) was adopted and introduced in Imo State with Order 05 signed by Governor Ihedioha at the time. That earned In Imo State the National Bureau of Statistics (NBS) award of Least Corrupt State in Nigeria, and BusinessDay award of “Fastest Growing Economy in Nigeria”. And above all, Ihedioha grew Imo IGR from the N250 million he inherited to N1.18 as of January 14, 2020, when he stepped aside!

How many shall we count and how many can we leave off! How many lions will a man kill before he’s crowned “Lion Killer”?

This short essay isn’t intended to be a catalog of the wonderful restoration achievements and accomplishments of Rt. Hon. Emeka Ihedioha as governor of Imo State. It’ll make the essay too long. Rather, it’s a look at what sponsored his much-feel and much-talked-about verifiable achievements.

The foregoing paragraphs have captured some of the qualities and leadership approaches that made Ihedioha excel with his RebuildImo administration in his seven-month tenure. There’s a lot to say about this, but it’s a short essay. Therefore, I’ll reluctantly rest my case at this juncture till soon again! Thank you!

By God’s grace, Imo State must be rebuilt!