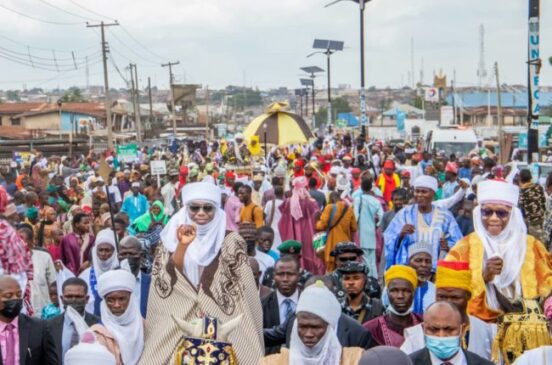 The Emir of Ilorin, Alhaji Ibrahim Sulu-Gambari, has commended the Ilorin Emirate Durbar Committee on the success recorded at the 2022 edition of the festival held immediately after the Eid-el-Kabir (Sallah) celebration in July.
The Emir who is also the Chairman, of the Kwara Council of traditional rulers, made the remark on Wednesday at his palace while receiving a report of the event from the committee.

The traditional ruler expressed satisfaction with the quality and magnitude of attendance recorded at the occasion, the cultural festival, particularly the colorful participation of Gov. AbdulRahman AbdulRazaq in the festival.

The emir further said that he was excited with the quality of time, energy and resources deployed by members of the committee before, during and after the event, saying “the facts speak for themselves”.

He highlighted ways through which the annual program could be improved upon in order to attain a global reputation and sustain the aspiration of cultural enthusiasts.

The first-class traditional ruler however urged the committee to work harder for the subsequent editions to record more astonishing success.

He assured the committee of his readiness to always support and effectively discharge his responsibilities and prayed for them for making him and other indigenes of the Emirate proud.

Mr. Suleiman Alapasanpa, the Chairman of the main organizing committee, appreciated and thanked the Emir for the opportunity given him and other members to serve the people of Ilorin Emirate through the committee.

Alapasanpa, who is also the Danmasani of Ilorin, told the Emir that the 2022 edition of the festival garnered quality support and affection from stakeholders within and outside Nigeria.

He noted that international organizations such as the United Nations Educational, Scientific and Cultural Organisation (UNESCO), National Tourism Development Corporation, National Theatre, and National Institute for Cultural Orientation, among others, participated.

The chairman assured of more auspicious participation and support in the subsequent editions of the event and thanked the Emir for his consistent fatherly advice to the committee.

He acknowledged the generous contributions of the state government and many indigenes of the Emirate, saying that without those support the success recorded would not have been possible.

Alapasanpa revealed that the committee had begun preparations for the next edition of the festival, adding that they will ensure that the 2023 edition would be the best in the history of the festival.

He also thanked the traditional title holders in the Emirate, Council of Ulamas, honorary titleholders, princes and princesses as well as members of the Ilorin community for their participation and warm receptions during the festival.

The chairman later presented a written report, photo album and other souvenirs produced by the committee to the Emir.
The chairman was accompanied to the Emir’s palace by the National President of the Ilorin Emirate Descendants Progressive Union (IEDPU), Alhaji Aliyu Uthman, the secretary of Trust and other members of the Committee