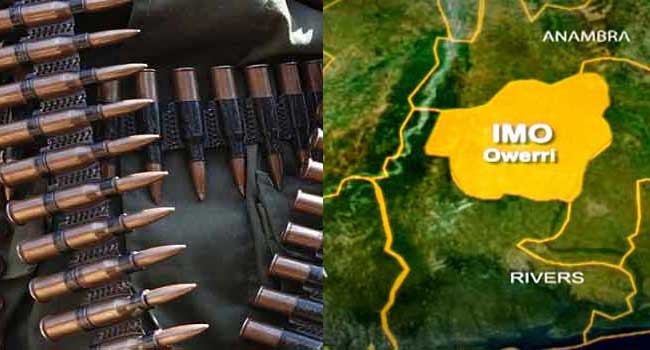 Ekwe community in Isu Local Government Area of Imo State was gripped by panic Saturday as gunmen whisked away 15 youths at Njaba bridge to an unknown location.

A source who disclosed the incident to Waka About Africa said that the gunmen stormed the community through the Njaba River, a boundary between Ekwe Community and Amucha in the Njaba council area of the state.

According to the source, the youths were said to be excavating sand at the Njaba River when the gunmen swooped on them and took them away after shooting sporadically in the air and searching for other youths in the vicinity.

“This morning, some masked gunmen invaded our community, Ekwe through Amucha, arrested some young men who were excavating sand at Njaba River.“After that, they went into the community shooting sporadically leading to people running helter-skelter,” the source revealed.

“Some ran into the surrounding bushes to escape arrest. The gunmen were arresting only male young men. They ignored girls and women as well as elderly men.

“Later, they stormed the palace of our traditional ruler, Eze Nicholas Ibekwe, commanded all to lie down and released about 20 gunshots into the air. They didn’t kill anybody but we are hearing that some might have sustained gunshot injuries.” The source said.

The traditional ruler of the community, Eze Nicholas Ibekwe, confirmed the incident to our correspondent.

Eze Ibekwe disclosed that four of the gunmen stormed his palace and ordered everybody in his palace to lie down.

He narrated that before storming his palace, he had already got wind of the information that gunmen were in the custody of 15 of his subjects who were excavating sand at Njaba River.

Ibekwe disclosed that one of the youths alerted the community after his release. He said he was released because of his visual impairment.

The traditional ruler revealed that four of the gunmen did not cover their faces but wore camouflage. Eze Ibekwe further disclosed that one of the gunmen spoke the Hausa Language when he ordered those in his palace to lie down.

Ibekwe disclosed that one of the gunmen even accused him of harbouring criminals in the community.

When reached for comment, the police spokesperson for the Command, Michael Abattam, advised the community to lodge a formal report to the police division in the area to enable the police.

In another incident, some heavily armed gunmen were said to have invaded the Boss FM radio station in Owerri on the Same day at about 11:30 am and abducted a co-host to a program on the radio, professor Jachimike Adiele.

A source from the radio station said the victim immediately after his program where he discussed “Igbo presidency” was taken away by the gunmen who lay siege at the premises of the station and took him away to an unknown destination.

Although the victim has been released after a few hours, it was not clear if any ransom was paid for his release, nor could it be established at the time of this report reason for his abduction.