It was glitz and glamour as the first edition of Great Achievers World Magazine’s WhatsApp Hangout was done and dusted recently in Lagos.

The magazine’s group had planned a hangout for about two months, between September and October, when they needed to meet each other one-on-one, after four years of being together as a family, posting, commenting, disagreeing and agreeing.

With the setting up of a planning committee, headed by Engr. Ebho Abure, the modality of the event was streamlined. The number of interested participants reduced to 20% from 70%.

The day eventually came, and as members started arriving at the venue, they hadn’t known each other, as an admin of the group, I was the only person they all had known physically. That was part of the fun.

According to the Administrator of the WhatsApp group and Publisher, Great Achievers World magazine, Inemesit Ebu, officially welcomed members to the event before handing over the affairs of the day to the Master of Ceremony (MC), Mr. David Bassey.

As the MC introduced members, you could feel the joy and excitement of meeting each member one on one for the first time with hugs, handshakes and waving of hands and exclamations.

‘It was fun, fun, fun as members enjoyed the cool music in the background. It was interesting sharing food with one another. I can’t remember if anyone ate alone as foods were unconsciously shared by participants from one plate to another”.

It was a family gathering indeed. Drinks were shared from the same bottles, and meat, and fish were eaten together from the same plates. Note, we all had our separate plates of food and drinks but the joy of togetherness made us reach out to each other’s plates for a taste or two.

A lot was benefited by participants at the event as networking was seriously done by members. Contacts were exchanged after members’ profiles were brought to the limelight. Quite interesting, I must say.

The Admin applauded the gentlemen who came with their wives. They added colour to the event.

While Mrs. Uwemediimo Umonnan and Mrs. Ama Bassey added more colour as they accompanied their husbands to have fun. 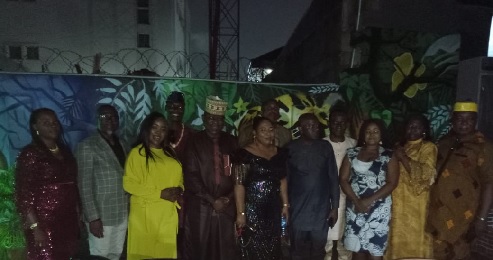 As the fun was on the elated Publisher/Admin shared branded gifts with the guests to mark the 4th anniversary of the Whatsapp group.

In conclusion, Ms. Inemesit Ebu added that the WhatsApp group is an arm of the magazine both the print and online versions.

The hangout is the first of its kind, and will be a yearly event, she said.

She appreciated the friends and readers of Great Achievers World magazine, she also acknowledge the presence of Nwanma Chinyere Ogidi, publisher/Editor-In-Chief of Waka About Africa.