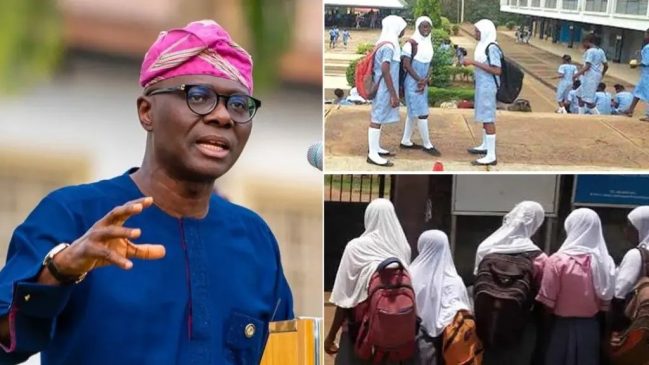 The Lagos State Government has said it is prepared to begin the usage of the Islamic headscarf, and hijab, in all schools in the state.

The government said this in a circular dated December 5, 2022, by the Head of Service, Hakeem Muri-Okunola, copied to relevant stakeholders, including the Deputy Governor, Speaker of the House of Assembly, the Chief Judge of the state, Secretary to the State Government, Commissioners, Permanent Secretaries/ Tutors General, Local Government Chairmen, Teaching Service Commission Chairman, heads of tertiary institutions and Chairman, State Universal Basic Education Board.

It explained that having exhausted all legal avenues on the matter and the verdict of the Supreme Court that students should be allowed to wear the hijab if desired, it had no choice but to abide by the law.

It added that its desire to enforce compliance is immediate.

The statement titled, ‘Supreme Court judgment on the use of hijab in Lagos State Schools,’ reads partly, “It is hereby notified for general information that the Supreme Court Judgement SC.910/2016 delivered on the 17th of June, 2022, on the use of Hijab as it affects Pupils/Students in Lagos State Schools has declared that students should be allowed to wear the hijab if desired.

“A comprehensive guideline on the use of hijab in schools will be issued by the state government in due course, however, you are to note that the judgment is binding on all schools in the state.

“As a law-abiding administration, all accounting officers are to note the contents of this circular for immediate compliance and give it the deserved service-wide publicity.”

Meanwhile, an Islamic organization, the Muslim Rights Concern (MURIC), has expressed gratitude to Asiwaju Bola Ahmed Tinubu, Governor Babajide Sanwo-Olu, and others for their ‘perceived’ role in facilitating the issuance of the circular.

Recall that MURIC on Monday made a passionate appeal to Tinubu to intervene in the hijab affair in Lagos State.

The organization which believed that its appeal was instrumental to the issuance of the government circular, expressed gratitude to Tinubu and others who it believed played a role.

“Sequel to the appeal made by our organization yesterday, the Lagos State Government (LASG) has issued an official circular which formally approved the use of hijab in all Lagos schools.

“It will be recalled that the Muslim Rights Concern (MURIC), appealed yesterday to the presidential candidate of the All Progressives Congress (APC) and former governor of Lagos State, Asiwaju Bola Ahmed Tinubu, to wade into the delay in the enforcement of the Supreme Court judgment on hijab in Lagos State schools.

“MURIC expresses profound appreciation to Asiwaju Bola Ahmed Tinubu for rising to the occasion. We also thank the Governor of Lagos State, Babajide Sanwo-Olu, for giving the final approval.  Both the Head of Service, Mr. Hakeem Okunola and the Commissioner of Education, Mrs. Folasade Adefisayo, for their constructive engagement which eventually led to the fruitful outcome.

“Equally worthy of mention are those who were involved in high-level diplomatic consultations behind the scene in the past 48 hours towards resolving the impasse. This resulted in treating the matter with military dispatch and the emergence of the circular within 24 hours. We are very grateful to them.

“MURIC congratulates the Muslim lawyers Association of Nigeria (MULAN), the Lagos Muslim Community and the entire Muslim Ummah who have shared our concerns over the years for the issuance of this historic circular.

“With this new development, MURIC pledges to double its pursuance of the presidential ambition of Asiwaju Bola Ahmed Tinubu as well as the second tenure goal of Governor Sanwo-Olu. We call on all Islamic organizations in the country and all lovers of good governance to join hands with us in ensuring that these two goals become fait accompli.”