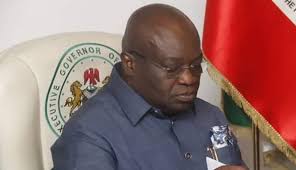 The sad news of the affected teachers was conveyed in a statement signed by the Chief of Staff to the governor, Dr. Anthony Agbazuere.

He said that Governor Ikpeazu sealed the uncertain fate of the teachers after receiving the report of the committee set up to investigate “employments carried out at the Secondary Education Management Board (SEMB) without waiver”.

The Executive Secretary of SEMB, Mr. Lawrence Ogbonnaya, who presided over “the supposed employment” was also sacked as the governor ordered his compulsory retirement.

The embattled SEMB boss had been on suspension since February 2020 when the bubble burst on the said unauthorized employment bazaar he initiated.

A total of 5,853 teachers were given jobs during the employment exercise spanning a period of three years. But after going through the list of the newly recruited teachers, the panel discovered that only 187 were employed through a waiver from Governor Ikpeazu.

He, therefore, directed that the illegally recruited 5,666 should be thrown out of the classrooms, while the 187 lucky ones said to have been lawfully employed, should be retained in the school system.

However, Ikpeazu has opened a window of opportunities for possible reabsorption of some of the sacked teachers.

He directed that schools that have a need for teachers “in special areas” should apply to the state Commissioner for Education and copy the Chief of Staff to the governor.

According to Agbazuere, whenever there is such a need to employ teachers, the government would revisit the list of the sacked teachers and pick from it to fill vacancies arising in the classrooms as a result of genuine cases of need.