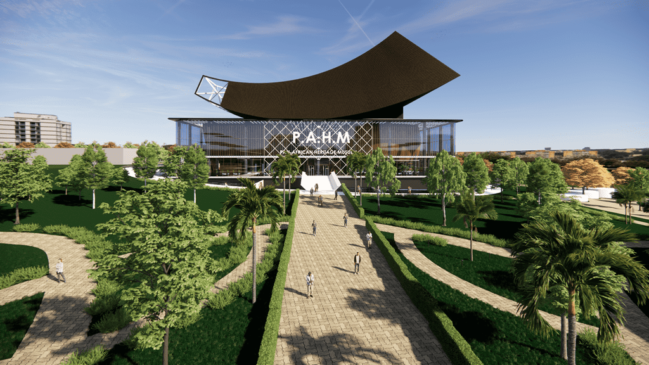 In our series of letters from African writers, media consultant and trainer Joseph Warungu writes about plans to build a huge museum in Ghana to reflect the history and heritage of Africans. A new migration of Africans is about to happen.

The Maasai of Kenya and Tanzania, the Himba of Namibia, the Somali of the Horn of Africa, the Zulu of southern Africa and the Mbenga of the West Congo Basin – among many other communities – could soon be on the move to a new home in Ghana.

The most significant mass movement of peoples within Africa started more than 4,000 years ago, when huge populations of Bantu speakers left their original dwellings in southern West Africa, to settle in other parts of the continent.

The new migrants will be traveling in the opposite direction. Like their predecessors, they will not require visas or travel documents.

Their relocation is not physical but cultural and spiritual. It is their history, their philosophy, their beliefs and their story that is about to find a new home.

The new dwelling is located at Pomadze Hills in Winneba. The 10-acre site in Ghana’s Central Region is about 60km (40 miles) west of the capital Accra.

It’s a sight to behold, with rolling terrain, covered in greenery. If all goes according to plan, by August next year this location will give rise to an impressive six-story structure – the Pan African Heritage Museum.

The location in Winneba, through which the “migrants” will enter their new home in Ghana, is just over an hour’s drive to the Door of No Return at Cape Coast Castle, from which millions of Africans were forced to leave the continent and into slavery.

The museum, which is under construction, has one key goal – to curate and tell the story of Africa using African voices, tools and culture.

The great minds behind the project say this is necessary because for a long time the African story has been told by others. They argue that when someone else tells your story, they tell it from their perspective so that they look good.

The museum, therefore, seeks to own the African narrative by bridging what the founders say is a gap that has widened among people of African descent for over 400 years. It’s a museum that seeks to teach, heal, and inspire.

Ghana’s President Nana Akufo-Addo says the museum will “provide a natural residence and resting place for all the looted cultural artifacts of our continent, which are housed in foreign museums and which will be returned to us”.

This is the latest museum to be built on the continent, following those in Senegal, the Democratic Republic of Congo and Nigeria, and comes at a time when there’s a growing acceptance in Europe that the items seized from Africa during the colonial era should be returned.

Judging by the digital version that was recently launched, the museum will be a stunning structure that will stand tall and be visible from far away – a monument of Pan-Africanism. As a passionate Pan-Africanist myself, I went on a tour of the virtual museum.

As you enter, your eyes are treated to beautiful contemporary works of art produced by great artists of African descent. Soothing saxophone sounds, accompanied by gentle piano notes, put you at ease.

As if on cue, I’m immediately grabbed by this wonderful painting by Nigerian artist Doba Afolabi. The work, titled Nite Voltron, depicts a passionate musician joyfully emptying the contents of his lungs into his saxophone.

A few virtual steps on and I’m staring at Tangled Trickster – an intriguing work by American visual artist, Aisha Tandiwe Bell, who is famous for using mixed media to create myth and ritual.

According to her, the woman portrayed as a trickster “sums up our modern fragmented, hyphenated identities and multiple consciousnesses”.

The idea of targeting our collective African identity and history by harnessing, celebrating and curating African culture in a unique Pan-African museum came about in 1994.

The man behind it is Kojo Acquah Yankah, a former editor of Ghana’s Daily Graphic newspaper and who previously served as an MP and cabinet minister in the government of the late President Jerry Rawlings.

He tells me the inspiration came to him as he attended the 375th-anniversary commemoration of the forced arrival of the first 20 Africans on the coast of Jamestown, Virginia, in the US – the birthplace of American slavery.

“The event was attended by over 5,000 people of African descent from all over the world, celebrating their historical memoir,” says Mr. Yankah.

“This inspired me to create the Pan African Heritage Museum to unite Africans and people of African descent and raise the self-confidence of Africans as a people with a rich history and heritage.” But why this museum when there are many others in Africa?

“There are less than 2,000 museums on the continent as opposed to over 30,000 in Europe and in the US,” says the man who also founded the African University College of Communications in Ghana.

“The museum is special because it’s the only one bringing all African heritage together under one roof.”

The principal architect for the project is James Inedu-George, a Nigerian famous for capturing the spirit of African cultures and infusing it into his designs. The symbol chosen for the museum is a horn, a communication tool announcing Africa’s renaissance.

The project is funded through donations and is estimated to cost about $50m (£40m). But its key supporters, including President Akufo-Addo, believe it will be worth the bill.

“It will not only benefit all the peoples of the world, but it will also imbibe in all of us a deep consciousness and understanding of the goals and ideal of Pan-Africanism”.

Apart from the artifacts and research materials, the museum will also have a garden of sculptures, a herbal garden and space for festivals, concerts, film shows and exhibitions from across the Pan-African world.

The innovation and creativity hub of the museum will be a space for young people to build on new ideas for the future after touring the facility. The museum will set aside a two-acre plot where it will replicate a selected number of African kingdoms, ancient and modern.

It will showcase their history, their art, and their culture and learn from their skills, craftsmanship and indigenous knowledge, which has sustained Africans until today. This is where the big stream of African “migrants” will find a home. Mr. Yankah hopes his vision will redress our distorted heritage.

“Our legacy was stolen, and our confidence dimmed by paralyzing accounts of our past and even our present, hence we disregard the wise sayings and indigenous knowledge of our own people and quote eloquently from sources alien to us for our daily living.”

Indeed, as the late Nigerian literary giant Chinua Achebe observed: “Until the lions have their own historians, the history of the hunt will always glorify the hunter.” Well, we Africans now have the pen, a paintbrush and a large canvas – it’s time to tell our story.