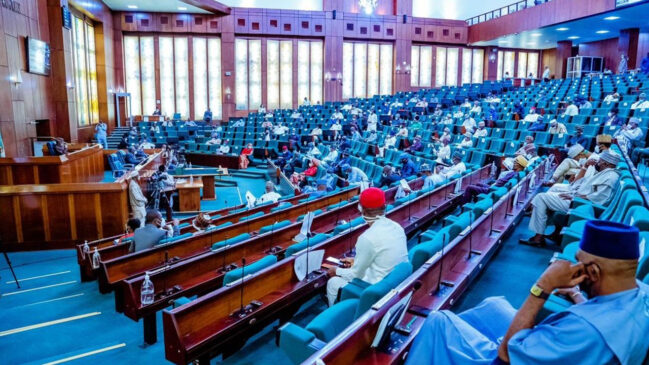 The House of Representatives has raised the alarm over the looming food shortage in Nigeria, calling on the Federal Government to initiate emergency preventive measures.

At the plenary on Wednesday, the House particularly urged the Presidency, the Ministry of Agriculture and the National Emergency Management Agency to “begin to make arrangements to mitigate the emerging food challenge.”

The House also mandated its relevant committees to interface with the appropriate ministries and agencies as well as the international development partners to “begin the process of establishing and implementing protocols to manage food resources and mitigate the food crisis.”

These resolutions were sequel to the unanimous adoption of a motion of urgent public importance sponsored by Messrs Rimamnde Shawulu and Solomon Bob, titled ‘Urgent Need to Emplace Emergency Programmes and Protocol for the Impending Food Shortages.’

Moving the motion, Shawulu noted that the world is apprehensive of an impending massive shortage of food and possible famine.

The lawmaker also noted that while the current impending food shortage is directly related to the Ukraine/Russia war, which he said had impacted negatively on the supply of grains and fertilizers, some areas have remained under armed conflicts.

He stressed that next to petroleum products, Nigeria’s highest import bill is on food, which he said was becoming costlier around the world “and our economic outlook, especially the debt-revenue ratio, may not be able to support the needed massive importation of food.”

According to Shawulu, a recently released Central Bank of Nigeria report showed that Nigeria’s food import bill increased by 45 percent to $2.71bn in 12 months, in 2021.

The lawmaker also made reference to various reports by different multilateral and international organizations “which show that a very significant population of Nigeria will face acute shortage and possible famine in the year 2022.”

He noted that so far, the attention of the international community is directed at the dire needs arising from the conflicts in the North-East, which have been the pledges and donations.

“The House is cognisant of the fact that terrorists often lay siege to farms, kidnap farmers, sack villages and force farmers to pay the ransom or some fees before accessing their farms. Many farming communities have abandoned their farms and are seeking refuge in urban centres and Internally Displaced Persons camps.

“The House is concerned that should no proactive actions be taken now, the impending hunger and food shortages will worsen Nigeria’s security situation.”