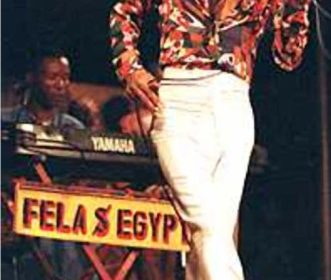 The first time I watched Fela Anikulapo Kuti perform was in the mid-1970s at the Enugu Campus of the University of Nigeria. Then, he was sinewy and effervescent. Vigorous and nimble, he sprang across the stage, as he danced, sang and played both the piano and tenor saxophone. Every move he made was mirrored in the sound of the music, as the drummer and the other percussionists followed his every move with their beat. His band members were spruced-up, decked out in pink “Crapelin” outfits. His dancers were scantily clad. They seductively swirled and swayed their hips to the rhythmically throbbing of the Africa 70 (the name of Fela’s band in the 1970s). Overall, his music was amazing, and his stage work was extraordinary. It was obvious that this Nigerian maestro had taken Nigerian music to hitherto unknown heights.

The last time I watched Fela was in the early-1990s in Washington, DC. at the Kilimanjaro Night Club. This time he was not as gorgeously attired and his band was not as splendidly arrayed. His years of courageous and relentless struggle against the abuse of power and official lawlessness in Nigeria had taken a toll on him. But he remained his defiant and indefatigable self, his band unflappably first-rate, his dancers vivacious and matchless, and his music exquisite. In his Yabis (verbal interlude), he winded from current affairs to international economics, and then, to African history. A man, obviously impressed, like everyone else in the audience, by his extensive knowledge and incisive mind shouted: Fela vacancy dey for Howard O. Make you go dey teach for Howard University O.

These qualities made evident on these two occasions, that I watched him, are what distinguished the phenomenon, Fela Anikulapo Kuti: a trailblazing musician and entertainer with the learning and versatility of a teacher, oratorical flourishes of a preacher, and the deep insight of a philosopher. And, in addition, he had that “most important of all human qualities”- courage – the human quality “that guarantees all others”. Not surprisingly, with his entry into Nigerian music, the Nigerian music scene could not remain the same; he completely revolutionalized it.

He was a nonconformist; everything about him deviated from standards of orthodoxy. In the late 1960s and early 1970s, Nigerian popular music was under the powerful influence of Western, especially American, music. Nigerian musicians copied and faked American and European musicians. They desperately needed to sound like James Brown, Otis Redding, the Rolling Stones, etc. Fela came up with something distinctly new: it had the pronounced base-line of Rhythm and Blues, heavy percussions of traditional African music and well-defined lead guitar as in Highlife music, laced with elaborate and dainty horns (trumpet, trombone and saxophone) and intricate piano of Afro-American Jazz. It was a unique musical genre. He called it Afro Beat.

The vocalism of Afro Beat also defied convention. Unlike the soft and velvety singing of Highlife, and similar styled singing, embellished with feigned American accents, of Nigerian Pop musicians, the vocals for Afro Beat was loud and coarse. It reflected of the vibrancy and upbeat of Nigerian, especially, Lagos life. Its lyrics, for the most part, were in the Nigerian mass language, Pidgin English, because they bore messages for all and sundry in Nigeria and beyond. They were the words of a social crusader and not the usual romantic platitudes, and ingratiation and extolment of the wealthy and powerful of Nigerian music.

The arrogance, greedy and the insensitivity of the Nigerian power elite, and their roughshod over the passive and timid Nigerian masses offended Fela’s natural sense of justice. So, like Jim Brown who, driven by his moral revulsion for racial injustice, set out, on his own, to overthrow the institution of slavery in the American South, Fela was on a one man mission to reform Nigeria of social injustice. This mission found expression in his music. With its poignant and defiant lyrics, he brayed against official corruption, arrogance of power, police and military brutality, etc. In addition, his songs reflected the mood and sentiment of the people. They expressed their pains, suffering, frustrations, hunger for a good life and longing for social justice.

And like Jim Brown and almost every other social crusader, Fela paid a heavy price for his crusading passion. He was persecuted by a series of Nigerian governments. The harrying and hounding of Fela by different Nigerian governments culminated in the burning of his house by soldiers in 1977. As the soldiers rampaged through his house, before setting it ablaze, they assaulted his guests, beat up his band members, raped some of his dancers and threw his 78-year-old mother out of a 2nd-floor window. She later died from the wounds she sustained from the fall. His mother, Fumilayo Ramsome-Kuti, was a foremost nationalist and politician. She was one of the leading figures in the Nigerian struggle for independence. In a mournful song, Unknown Soldier, that described the burning of his house and the killing of his mother by soldiers, Fela eulogized his mother as, “Political Mama, Influential Mama, Ideological Mama, and the only Mother of this Country”.

Jim Brown failed to overthrow slavery in America. He was captured and lynched by a White mob. But the seed he sowed by that resolute attack on the institution slavery and its associated racial oppression germinated, and years later, blossomed, and through its diverse branches, flowered into institutionalized racial equality in America. Similarly, Fela, in his lifetime, failed to reform the Nigerian society. Official corruption, mass poverty, police brutality, lawlessness, violence, electoral fraud, theft of public funds, etc. remain the defining features of the Nigerian society. But then, Fela had left indelible marks on the Nigerian society. Apart from his profound influence on Nigerian music, he contributed immensely in awakening the political consciousness and aspirations of the Nigerian masses. In addition, his music continues to reverberate. It continues to strike a deep chord in Nigerian minds because of the matchless splendor of its melody and the incontrovertible pertinence of its message.

At his death, Lagos, the bustling, boisterous commercial capital of Africa, came to a somber standstill. Gathered to pay their last respect was a throng – unparalleled in its size and incongruous in its composition. The incomparably large crowd, made up of the rich and poor, learned and ignorant, chaste and dissolute, bumpkins and sophisticates, Nigerians and foreigners, etc, gathered in solemn veneration for one of the leaders of our time. It is important to note that leaders are not just those that occupy positions of enormous political power and influence. Actually, real leaders do not have to occupy exalted positions in government and industry to lead. A leader has a following because he possesses that indescribable, indefinable magnetism that powerfully and irresistibly draws people to him. Did millions of Nigerians not gravitate towards Fela and his message? People also follow a leader because leadership represents a current in history. And a current, naturally and effortlessly, moves and carries people along?