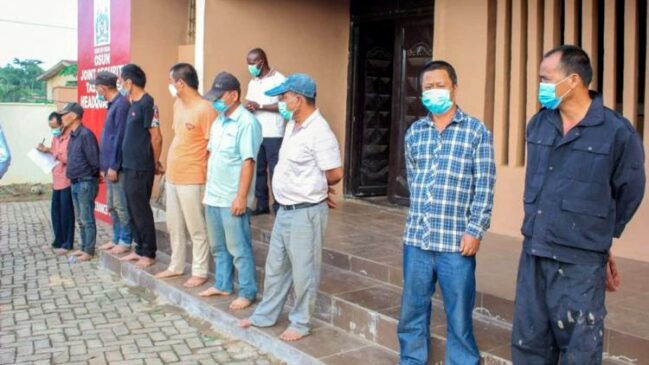 Following recent complaints about the resurgence of the activities of artisanal miners in Osun State, the National Environmental Standard and Regulations Enforcement Agency (NESREA) has said after its investigation, the perpetrators will have their facilities sealed and charged to court for an environmental violation.

The director-general of NESREA, Prof. Aliyu Jauro, who disclosed this at a press briefing yesterday in Abuja, recalled that the agency had carried out sensitization workshops for artisanal miners drawn from different parts of the state, where they were enlightened on the effects of their activities on human health and the environment.

Jauro said despite the efforts, the agency was recently inundated with several complaints about the resurgence of the activities of artisanal miners in the area raising fears of degradation of the environment, destruction of farmlands and contamination of water sources, especially the Osun River.

He, however, noted that such mining activities were not new in the area because Osun State sits on a schist belt that is richly endowed with mineral resources like gold, tourmaline, tantalite, topaz and other gemstones and which attracts the artisanal miners.

The DG said, “Following the recent reports, NESREA had intensified its compliance monitoring of the affected areas which revealed a large presence of Chinese miners, who with the aid of excavators and related equipment, mine and wash the minerals along or close to river courses.

“There was also high activity of artisanal miners who scavenge surface minerals at abandoned mine pits and wash them in nearby rivers, most of which flow into the Osun River. The river has become more turbid with reddish coloration from the disturbance of mining and washing into the river.

This is worrisome since the cultural practices at the Osun Grove require contact with the water in the form of drinking, and bathing and people also use the water daily in their homes.”

He said a full-fledged investigation has been launched and officers from the headquarters and the South West zonal office have been in Osun State, collecting water and soil samples which have been taken for laboratory analysis to determine the level of pollution of these activities which will inform our enforcement decisions so as to protect the life of Nigerians affected by these activities.

“At the conclusion of the investigation, the provisions of the National Environmental (Mining and Processing of coal, ores and industrial minerals) Regulations, 2009 and other environmental instruments will be invoked against those involved in unsustainable mining practices in the state. This will definitely mean that perpetrators will have their facilities sealed and they would also be charged to court for environmental violation,” the director general stated.