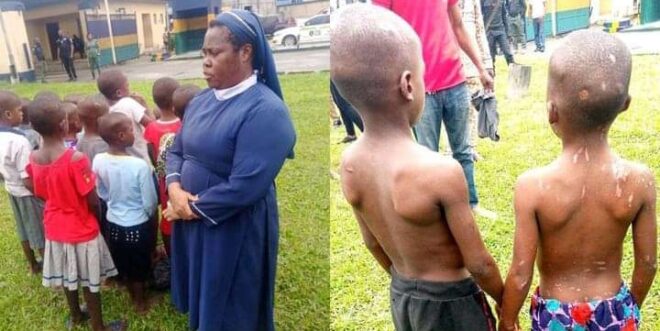 Operatives of the Rivers State Police Command have arrested a suspected child trafficker, Maureen Wechinwu, who claims to be a Reverend Sister and confessed she ‘buys’ the children.

The police also paraded 20 other suspects arrested between August and September for various crimes.

The police had, based on intelligence reports, arrested Maureen at her residence in Aluu, Ikwerre Local Government Area of Rivers State, and rescued 15 children from her home.

The Commissioner of Police, Friday Eboka, revealed that the children rescued from the suspected trafficker were aged between seven and nine, adding that the suspect would be prosecuted upon completion of investigations.

Eboka said preliminary investigations have shown that the children were picked from different parts of the South-South states and were being sold.

He said it took over 24 hours before the children were able to narrate their experiences to the police, adding that they were being tortured and maybe hypnotized as well.

He said: “On September 3, Operation Restore Peace Personnel of the Command, acting on credible information regarding a hideout of child traffickers, stormed Omuigwe Abuja Phase II, Aluu, in Ikwerre Local Government Area, where a lady who claimed to be Rev. Sister Maureen Wechinwu, aged 44 years, was arrested.

“Fifteen children were rescued and the case was transferred to CP Monitoring Unit for discrete investigation.

“Investigation revealed the following facts: Prosper Godwin (m) was abducted at Ikpazasia market in Bayelsa State on 31/10/2020, together with two others whom he does not know their whereabouts, and was taken to the suspect.

“Later, he (Prosper) was sold to a woman in Lagos and then returned to the suspect.

“The parents, Mr. and Mrs. Godwin Ododor, have been contacted and they corroborated the child’s statement.

“Queen Harry (f) was abducted at Ojukwu Field Mile 1, Diobu, Port Harcourt at about 7 p.m., while on an errand with the elder sister.

“The mother, Mrs. Florence, has been contacted and she corroborated the facts.

“Miracle John Ohiri (f) was abducted on 19/11/2021 at Ada-George Road, Port Harcourt, opposite Holy Rock Church, along with her mother and two siblings, who have not been seen to date.

“The father, John Ohiri, who has been contacted for identification of the child, corroborated her statement that he reported the incident at Rumuokpakani Police Station.

“The father, one Emeka Edeze, has been contacted and identified his child and also confirmed the incident.

“Chimele Obinna (f) was abducted on 24/04/2022 at Rumuodara/Culvet Oroigwe, Port Harcourt, while seated in front of their house with her sister.

“The mother, Glory Obinna, was contacted and she stated that the incident was reported at Okporo Police Station.”

Eboka stated five parents have come to identify their children and that the police were yet to locate the parents of the others, calling on parents who lost their children to visit the command.

Maureen Wechinwu, in an interview, stated that she had become a disgrace to her people and to herself, insisting that she is not into trafficking.

Maureen said: “I run an orphanage with children of mad people. Fransisca Onyinyechi, who was given birth to by a mad woman in the Ogbogoro community market, is one.

“I cannot say that I am a reverend sister now that I am a disgrace. But I believe I was earlier.

“I am of the Ladies of Victory Missionary Sisters. It is in England, a foreign congregation. I am the only Nigerian in it.

“Some of the children are mad people’s children. The others are brought to me by one Mr. Victor.

“Sometimes he comes with them in twos. One Miss Alice brought two to me. Alice said since I am a beginner that I should take them.

Two women, who have already identified their children at the police headquarters, expressed joy over the police operation that led to the children’s rescue.

Glory Onyia, the mother of one of the rescued children, disclosed that her child went missing five months ago, adding that the family had been in pain.

Onyia said: “My child got missing on April 22. He is an eight-year-old boy. I have been moving around from church to church. I even went to Okporo Police Station to give reports.

“I went out and when I returned I did not see my child till night; I searched for him all around.

“I am very happy. When he saw me he was very happy, shouting Mummy and everybody in our compound shouted when the police brought him.”

Also, Nkechinyere Harry said: “My daughter is Queen Harry, she is nine. She was kidnapped at Miles One close to Ojukwu field.

“When she returned, Queen was missing. She came back home, but could not find her.”