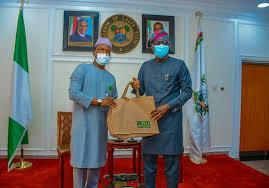 As part of preparations for the reopening of Murtala Muhammed International Airport, Lagos for flight operations, the management of Federal Airports Authority of Nigeria (FAAN) on Tuesday, September 1, 2020, paid a courtesy visit to the Executive Governor of Lagos State, His Excellency, Governor Babajide Sanwoolu.

In his remarks, the Managing Director of the Authority, Capt. Rabiu Yadudu, who led the FAAN delegation congratulated His Excellency and members of his cabinet for the various strides and achievements since the assumption of office as the Governor of Lagos State.

A statement issued by the General Manager Corporate Affairs Mrs. Henrietta Yakubu stated that Lagos State, being Nigeria’s Centre of Excellence is a major economic centre and would be the 7th largest economy in Africa if it were a country.

Commending the efforts of the State Government in developing critical infrastructure across the State, Yadudu added that the completion of various people-centered projects particularly the Oshodi/Ajao roads to Murtala Muhammed International Airport is an attestation to the delivery of the mandate by Governor Sanwoolu led the government to the good people of Lagos State.

Seeking the support and collaboration of the Lagos State Government towards ensuring improved safety, security, and better service delivery at MMIA,  Yadudu informed Sanwo-Olu that the brand new international terminal constructed at MMIA through counterpart financing from the China Eximbank would be completed and commissioned for use before the end of the year.

Yadudu highlighted some of the challenges FAAN would like the Lagos State government to address to include: road expansion MMIA/GAT/MMA2, rail Project- the right of way, possible link to Lagos Station, Shasha/Ajao encroachment/commercial concerns, donation of Co-buses (Apron Buses), evacuation of the mechanic village (Oshodi road), Tollgate MMA amongst others as issues the authority would want the Lagos State Government to assist in resolving.

READ  COVID-19 Lockdown: Robbers On Rampage In Ogun As Residents Call On Governor, Police For Rescue