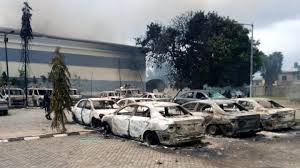 Mark Odigie, an information technologist, had on Wednesday taken his wife, Tope Mark Odigie, to the headquarters of TVC, where she works.

The atmosphere around the city was tense and uncertain. The night before had been characterized by the cries of innocent peaceful protesters at the Lekki toll plaza, who were faced by the bullets of trigger-happy soldiers.

Tuesday’s brutal attack by these soldiers who were drafted to maintain peace and order following the curfew earlier imposed by the state’s governor, Babajide Sanwo-Olu, has been condemned by many.

So on Wednesday morning, Mark Odigie, an information technologist, could not permit his wife, Tope Mark Odigie, to drive alone to nearby Ketu-Ikosi Road, headquarters of Television Continental (TVC), where she works as a co-host of the station’s popular breakfast talk show- Your View.

“So I decided to drive her to the office, leaving our two nine-year-old kids at home,” he said.

Mr. Odigie said he stayed at the carpark inside his Mazda CX-9 SUV waiting to take his wife back home since the program was billed to end by 11 a.m. But that was not to be.

Apart from watching his car burn to ashes, Mr. Odigie could only be reunited with his wife after hours of emotional and physical torture. He said those who razed the station to the ground were too “sophisticated attackers to be called miscreants.”

He told this newspaper his confusion about the whole scenario, saying; “I couldn’t call these guys (the arsonists) miscreants. They were pretty much educated and spoke good English. They were very organized, and chanted; “No killing,” “No killing;” “Just destroy,” “Just destroy;” “We have our targets.”

“It was at that point that I began to wonder what was really going on. They were very clear about what they came for.”

Narrating how it all started, Mr. Odigie said midway into “Your View,” a multitude of young men armed with dangerous weapons such as machetes, axes, knives, sticks, and petrol bombs, invaded the compound through its gate that leads to Aladelola Street in Ketu.

“Before the attack, there were about four RRS (Rapid Response Squad) vans and close to 20 police officers within the compound. But the moment these boys came in, the officers simply took to their heels and disappeared through the gate that leads to the CMD road,” he explained.

He said other workers, who escaped the attack, also scampered for safety but still hung around because “no one was sure of where to go.”

But for his wife and her colleague, Morayo Afolabi-Brown, and a few other technical officers including cameramen, the soundproofing in the studio prevented them from sniffing danger hovering around them.

So as the fire raged, and with his car burning at the carpark, Mr. Odigie said what preoccupied his mind was his wife’s whereabouts, and how to rescue her from the inferno.

Police refused an appeal for rescue

After waiting without any hope of his wife escaping the violence, Mr. Odigie approached the police officers who he said were gathered on the CMD road watching the smoke billowing from the burning building, and sought their help to rescue his wife. But his plea fell on deaf ears.

He said; “Suddenly, I developed a heart of stone and decided to go in because I wanted to rescue my wife. I felt whatever that would happen should happen. So I begged a few TVC workers who were also standing at the CMD gate, to join me. About five of them summoned courage and agreed to go in with me. Some ladies kept shouting and were crying as if we were going to die.

“So we went in and saw hundreds of attackers. They shouted at us asking us who we were. We raised our hands and simply replied; “We are with you.” We told them our colleagues were still in there. And surprisingly, they listened to us. They told us they already rescued everybody. They said they were not interested in killing anyone.”

Mr. Odigie said when he insisted that his wife was still trapped in the building, they then volunteered to take them out of the compound to see those they had rescued.

“So they took us to the back where we met another crowd who were throwing petrol bombs and chanting “no killing, no killing.” As soon as we were brought before them the crowd charged at us, but one of them that led us there quickly took charge and explained what happened,” he narrated.

He said immediately after the explanation, one of them described Mrs. Mark-Odigie’s appearance to the husband and mentioned Morayo as the second lady they just rescued. Then they decided to take them to the Oshonaike community, near the station, where both his wife and her colleague were kept.

At the Oshonaike community, the residents took custody of them for the next five hours “until they said the coast was clear for us to move, and we were led out of the community to a path leading to Magodo.”

Amidst trepidation, they trekked home to the waiting arms of their children.

But while narrating their experience to their custodians at the Oshonaike community, Mrs. Afolabi-Brown spoke about her seized phone.

“Suddenly some of the guys listening to the narration said they would talk to them to return it. Lo and behold, before we left the community later in the day, the phone was brought to Morayo,” he explained.

Your View back on the air

But despite the trauma of Wednesday and like soldiers at the war front, both Mrs. Mark Odigie and her colleague- Afolabi Brown, said no retreat, no surrender. On Thursday morning they were back on set to present their favorite program. Though there was no longer a studio to use, they deployed social media to the rescue.

While narrating their ordeal on the program, the journalists said the experience was a mixed grill. Though they said the attackers were very lenient on them, they threw a few punches on Mrs. Afolabi Brown’s heads.

“One of them initially rummaged my handbag but others quickly intervened and reiterated that the mission was neither to kill nor steal,” Mrs. Mark Odigie said.

They have since returned to their social media handles, thanking Nigerians for their prayers and best wishes, and singing praises to God.

Meanwhile, the management of both the television and the radio stations have since taken stock of the damage, with a total of 44 vehicles burnt, four outside broadcasting (OB) vans, three production control rooms, Two Master Control Room (MCR) studio playout machines, completely burnt.

There is yet no official statement on the next line of action but soldiers have taken over the security of the facility and cordoned off the place.