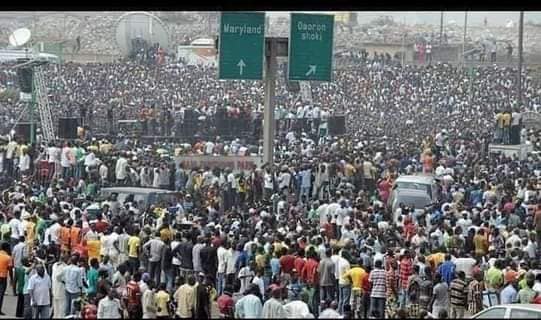 SARS has ‘officially’ ended, but Nigerian protesters are not backing down.

Nigerians are not appeased and they want more than a mere announcement that SARS has been dissolved.
After years of a relentless campaign against the culture of abuse by officers of the Federal Special Anti-Robbery Squad (FSARS) of the Nigeria Police Force, the notorious unit has been officially dissolved.

Nigerians have campaigned for years to have the unit scrapped after numerous well-documented incidents of abuse including harassment, extortion, torture, and extra-judicial murder.

The latest outrage that sparked over the past week led to widespread protests across many states in the country, the most publicly-charged demonstrations against the unit.

The initial days of the protests forced the Inspector-General of Police, Mohammed Adamu, to announce some restrictions to their operations on October 4, 2020.

The reforms he announced were similar to those announced every single year for the past four years, so the public was unsurprisingly unreceptive.

President Muhammadu Buhari’s appeal that he’s committed to comprehensive police reform also did the opposite of calming the public.

The protests continued, and they started to spring up in more places with more people demanding the complete shutdown of SARS.

While bodies on the ground grew, the advocacy online went global with millions using the EndSARS hashtag on Twitter, and notable global figures adding their voices to advocacy.

READ  Opinion: The Lies And ”How Many Times Will SARS Be Scrapped?”

Protests started springing up abroad too, in Germany, in the United States, and the United Kingdom.

With protests blowing up all over the country and many planned for days to come, the IGP announced on Sunday, October 11, that SARS had been dissolved across all 36 states and the Federal Capital Territory (FCT), Abuja.

All officers serving in the unit are to be redeployed to other police commands, formations, and units, and a new arrangement to be made for tackling violent crimes, the primary role of the unit just disbanded.

While still suspicious of the dissolution of SARS, Nigerians are now demanding that the government implements a very widespread and transparent policy reform that will ensure their rights to civil liberties.

This call has been made even more important by the high-handedness of authorities in dealing with protesters.

Police officers have relentlessly attacked protesters especially in Abuja where many have been injured, and Ogun State where some have been killed. So, the protests continue.

Some of the new demands include the release of all arrested protesters, and justice for all deceased victims of police brutality, with appropriate compensation for their families.

An independent body is to be set up as soon as possible to oversee the investigation and prosecution of all reports of police brutality.

Nigerians also want all disbanded SARS officers to undergo psychological evaluation and re-training before they can be redeployed.

READ  Ashawo Work Na Work’ – High Court Rules That Prostitution Is Legal in Nigeria Ordered N100,000 Compensation To Each Of The Applicants.

Not only do Nigerians want authorities to expedite the reform of the entire Police Force, but they also want it backed by the authority of a voice that belongs to President Buhari who has been hiding behind press releases and media aides.

The president, in his usual reticence, has failed to address the nation’s currently hottest burning issue in a way Nigerians have demanded.

All the protests planned for this week will go ahead as scheduled, protesters have insisted until there’s enough to convince Nigerians that the battle has been won.