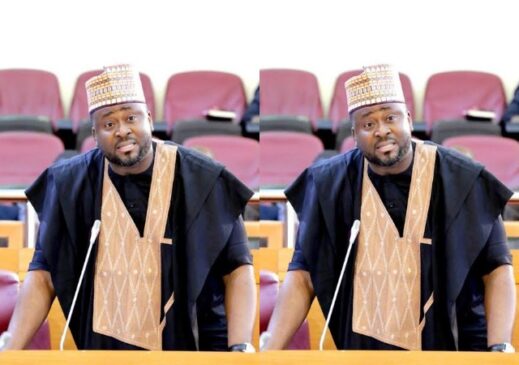 Desmond Elliot, the lawmaker representing the Surulere constituency in the Lagos state house of assembly, has come under fire again after his comment about social media.

Recently, a video of Elliot speaking at a recent plenary session of the house where he addressed the vices of social media surfaced and went viral online.

In the video, the lawmaker reacted to the unrest that trailed the shooting of #EndSARS protesters at the Lekki toll gate.

He said there will be no Nigeria in five years if the vices of social media aren’t tackled.

In a new video released recently, the lawmaker is heard slamming celebrities and social media influencers saying they had a grip on the EndSARS protesters. He went on to call Nigeria youths CHILDREN which triggered many social media users.

Desmond said; “Mr. Speaker, we need to address certain things. The Nigerian Youth, The Social Media, The Social Influencers, All of these are making the narrative that we are seeing today, except we are joking with ourselves. Social media is good but it has Negative impacts.

“Let me thank you for condemning the killings and carnage that happened at Lekki. When I went through the comments I could not believe it, Mr. Speaker, the curses, the abuses from children, and I ask myself, is this Nigeria? What is going on?

“Children cursing, people having the effrontery to enter an Oba’s palace, hold the staff of office? Culture is gone. Mr. Speaker, in the next 5 years, there will be no Nigeria if we don’t act now.

“The youth is not only those who do the peaceful protest, but those who have looted and destroyed lives are also youths as well.”

“Go to the elections, if you are tired come and enter government. People are dying. The narrative must change,” he added.

“Pregnant women went into malls, picked things, and went away. When shall we change this narrative? I put it to all the celebrities out there and all the motivational speakers. This is the only country we have.

“When anything happens, what is our common say is ‘we die here’. Please celebrities and social media influencers, stop the hatred already. You have a means constitutionally to change the government, it’s called your PVC.”

Elliot had a few weeks ago provoked outrage on social media after he defended and described his own political career as being a product of godfatherism.

Fans became furious after the viral video hit online due to his previous acting denying the fact that he agreed to the shut of social media because Nigerian celebrities are misusing it and it would cause Nigeria to be no more in five years.

@Davido Just like many Nigerians reacted, Davido reacted by tweeting; Davido slammed popular Nollywood actor turned politician, Desmond Elliot over his comments on a social media bill in the Lagos State House of Assembly.   Recall that, Davido agreed with a tweet that said Desmond Elliot is proof that a youth could be president and still fail Nigerians. ”Desmond Elliot just destroyed all the precious childhood memories he gave us in movies.’

Tekno has slammed Desmond Elliot in his new post as he calls him “Desmond Idiot”. Tekno descended on him following his viral video of him discussing social media regulation. Tekno in his reaction called him an idiot for making such comments in the viral video. He has been in all news headlines as his insults to the youth, have sparked controversies in revealing his secrets to the public.

@IniEdo Slams Desmond Elliot, tells him to man up and own his mistakes. The renowned Nollywood actress and brand influencer Ini Edo also taken to her social media page to hit hard at her colleague actor Desmond Elliot following his recent utterances in the Lagos state house of assembly which invited severe backlash from Nigerians. Taking to her Instagram story, Ini Edo went ahead to indirectly shade the actor turned politician asking him to man up. She stated that she despises men who cannot stand and back their actions but choose to hide behind excuses that make no sense

Some of the attacks come from his fellow celebrities like Davido,  Tekon, Ini Edu, Uche Jombo, Georgina Onuoha in the faraway USA, and former presidential aide Reno Omokri.