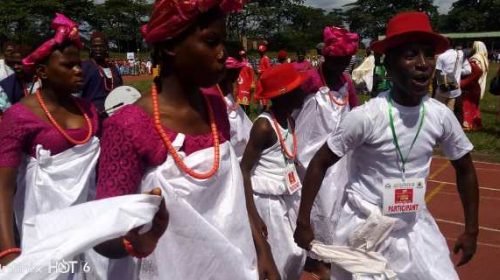 After 31 editions, the ancient city of Benin finally played host to the 2019 edition of the National Festival of Arts and Culture (NAFEST) with a colorful opening ceremony.

The Executive Governor of the state, Mr. Godwin Obaseki alongside members of his EXCO and Director-General, National Council for Arts and Culture, Otunba Segun Runsewe symbolically opened a cultural calabash to declare the festival open at the University of Benin Sports Complex.

The opening witnessed a string of captivating performances by veterans such as the legendary Guiltar Boy, Sir. Victor Uwaifo and ace Afro-pop Crooner, Innocent Idibia popularly known as Tuface amongst other highly entertaining displays.

Speaking at the event, Governor Obaseki stated that the programme would help in strengthening the bond of unity in Nigeria.

“We are happy to host the nation. Our culture unites us all. You saw the performances by various states today and for the first time in the history of the festival, we are having the highest number of states participating in the programme,” he said.

He thanked the NCAC for making the hosting right possible for the state admonishing everyone to participate in the programme throughout the week.

In his address, Otunba Runsewe said the 32nd edition of NAFEST has shown that Nigeria is a great nation with diverse culture, adding, “There is no disagreement that this programme has brought out the unity of the country as both the military and civilians have participated in this edition here in Benin.”

Also speaking at the opening, Chairman, House of Representatives Committee on Culture and Tourism, Rt. Hon. Omoregie Ogbiede Ihama said, “Today is for celebration as history has been made here with Edo hosting NAFEST for the first time in 40 years.”

“My committee is committed to supporting the festival. We beat five other states to win the hosting right. The festival coincides with the birthday and third-year coronation anniversary of our Oba, Ewuare II.” He added.

Other dignitaries who graced the opening include, wife of the Edo Governor, Mrs. Betsy Obaseki; Deputy Governor, Rt. Hon. Philip Shaibu and his wife, Mrs. Maryann Shaibu and Edo Commissioner for Arts, Culture and Diaspora Affairs, Hon. Osaze Osemwengie-Ero. The weeklong event has been programmed to entertain, empower and foster unity and pride amongst Nigerians with a sumptuous lineup of activities set to light up Benin.