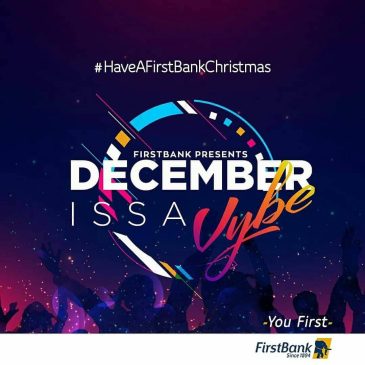 It was glitz and glamour as the premier and leading financial institution in the country, FirstBank thrilled their customer with a memorable “DecemberIssaVybe” at the just concluded Vibe on the Beach, featuring sensational music act, Ayodeji Ibrahim Balogun widely known as Big Wiz. The timing of the concert was right, having had Asake and Kiss Daniel’s concert precede that of the grammy award-winning music sensation.

DecemberIssaVybe is not just about music but fun, fun and fun in its entirety, from stage plays to art and culture… the list comprised Culturati to Beeta Arts Festival Abuja, KoffiTha Guru Unorthodox, Duke of Shomolu Production’s Encore, Our Duke Has Gone Mad Again and UfokIban.

Others supported by the Bank include; Joromi: The Musical Concert; Osamede, Awo and UfokIban by Duke of Shomolu Productions.

So back to the main gist… tell me who does not love gist, especially when it comes to Big Wiz.

Vibes on The Beach was held at Landmark Beach Oniru, Lagos on Friday, December 30th, 2022. It was unarguably an amazing night of fun and nothing but a star-studded show which exploded the audience to the height of ecstasy and rhythm of bliss courtesy of FirstBank.

With the kick time slated for 6 pm, the environs of Oniru were a beehive of activities as thousands thronged Landmark to be a partaker of the grandest Lagos concert of the year.

The organizational skills of the organizers and sponsors were nothing short of perfection as Landmark was transfigured into a haven of an international center, divided into regular, VIP, and VVIP.

Of a truth, the attendees who cut across individuals, friends, family members who came for reunions, and lovers were all smiles as they passed through the passage of entrance branded with FirstBank, the only financial brand which has provided them the opportunity and platform for yet another memorable homecoming experience with their idol, Wizkid.

Those at the regulars, VIPs, and VVIPs stands were mesmerized by the decoration and branding of the venue and the cool atmosphere which prepared them for the entrance of their favorite show hosts, Mr. Macaroni and Kiekie whose real names are BukunmiAdeaga-Ilori.

Afterward, Landmark was thrown into a frenzy as Big Wiz, the biggest act of the night was ushered on stage. Interestingly, the entrance of Big Wiz was a barrier breaker and line crosser as those in the regular, VIP, and VVIP stands all melted into unison to the scintillating performance of the music superstar as he took everyone down memory lane starting from his evergreen debut singles to the newest and fresh contemporary songs. And guess what? Wizkid surprised everyone and added a juicy flavor to the event by doing a collaboration with the popular act, Naira Marley.

Truth be told, the 2022 edition of “#DecemberIssaVybe” by FirstBank goes beyond excitement but birthed memories that will be hard to fade off attendees’ minds for many years.

The bank’s dedication to going beyond functional products and benefits for its stakeholders and providing these types of enabling experiences sets it apart in the industry and solidifies its position as a leader in not just directly supporting the arts and entertainment industry but economically impacting its value chain.

Anyone not following the Bank is surely on a long thing but hey, it is never too late as there are still many excitements the Bank creates on its social media ecosystem via @firstbanknigeria (Instagram); @FirstBankngr (Twitter) and First Bank of Nigeria Limited (Facebook).

2023 will surely be another back-to-back hit as the financial giant creates more memorable fun for its customers and followers. Culled