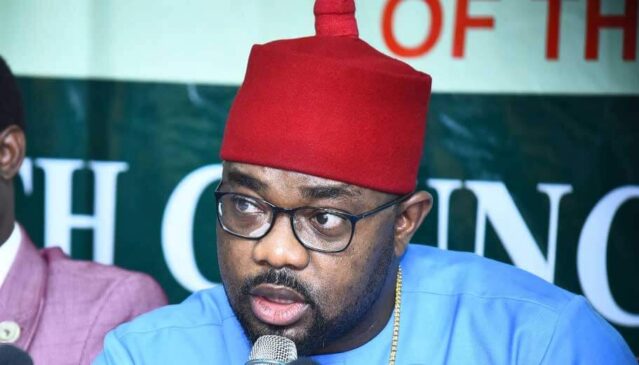 The group also alleged that a court case has been initiated to force INEC to stop the use of the Bimodal Voter Accreditation System (BVAS) in the coming general elections The Coalition of United Political Parties (CUPP) has raised the alarm over alleged plots to compromise the Independent National Electoral Commission (INEC) voters register.

At a press conference in Abuja on Wednesday, the coalition said the plots had been perfected in 21 states under the leadership of governors of the All Progressives Congress (APC) in favor of the party.

It also alleged that a court case has been initiated to force INEC to stop the use of the Bimodal Voter Accreditation System (BVAS) in the coming general elections.

To back his claims, the CUPP spokesperson, Ikenga Ugochinyere, presented a copy of the suit filed at the Owerri Federal High Court on 24 August and copies of voter registers with questionable names.

Mr Ugochinyere questioned the usage of passport photographs of long-dead persons, names, gender and age of thousands of registered voters on copies of the register shown to the camera.

The report alleges, that the process to clean up the INEC registration data is ongoing, and many of the names culled from the voter register presented by the CUPP are not Nigerians but from countries like Cameroon, Togo, New Zealand, Zimbabwe, Brazil, Zambia, among others.

Mr. Ugochinyere also presented instances where pictures of male registered voters carry the names of female voters and vice-versa. He linked the development to the compromised staff of the INEC in Imo State and urged the commission to fish them out before the elections.

“Significant among the discoveries in the register is the fact that the majority of the foreign names were all born in 1983 despite whether their photographs showed they were old or young.

“Many people were also shown to have been born between 1900 and 1914 yet their photographs were those of young people.

“Equally, many male photos had their gender written as female and vice versa,” Mr. Ugochinyere said while showing documents to back up his claims.

He claimed that if the electoral fraud allegedly plotted by unnamed top officials of the ruling party fails, there may be a call for the suspension of the INEC Chairman, Mahmood Yakubu.