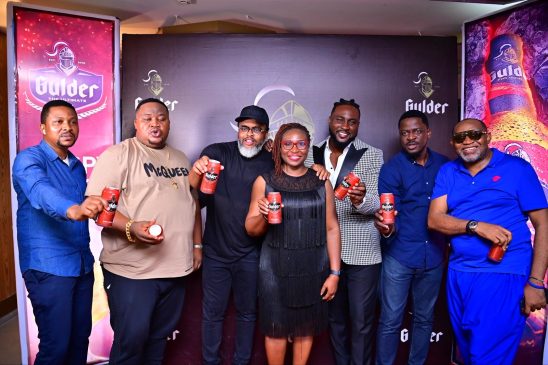 The trio will serve as the faces of the Senior Man Campaign, an initiative designed to recognize, celebrate, and reward excellence in craftsmanship in different fields that cut across all socioeconomic strata.

The Gulder Lager beer, one of the Nigerian Breweries’ beer brands, has thrived in the Nigerian beer market for over five decades through excellent craftsmanship in brewing.  Understanding the dedication and skill required to achieve greatness, has served as a guide for selecting its current ambassadors.

Pere, fresh off a global reality television franchise, launched a successful career as an actor in the Nigerian film industry, colloquially known as Nollywood. The US-trained nurse has also become one of the prominent faces in the influencer space, inspiring millions of young creatives to pursue their dreams by showcasing their talents across various mediums.

As the world gradually shifts towards the consumption of afrobeat and other genres that are original to Nigeria, one of the driving forces is Gaaga, whose work is steeped in cultural appreciation. The singer, songwriter, and producer have dozens of hit songs to his name.

On the other hand, an individual like Chief Priest has made it possible for indigenous artists to properly monetize their content through tours that visit many states in the country. As a creative entrepreneur with an acumen for discerning bright creatives, the show promoter has worked with A-listers like Davido, Burna Boy, Perruzzi and more.

Speaking at the unveiling ceremony that took place at the Vertigo Restaurant, Lagos, Portfolio Manager, Flavoured, Non-Lager & Craft, Nigerian Breweries Plc, Maria Shadeko said the partnership will serve as an inspiration for those who aspire to greatness in their different professions.

“We want to put everyday people on the pedestal. Shadeko explained. We want to make them feel noticed for the immense contributions they make in society through their craft by telling the story of their confidence and willingness to take on new adventures.”

“Celebrating them unlocks another level of greatness. We hope that during the Senior Man campaign, more and more people are elevated. Done collectively, we, in many ways preserve our identity as people of great will and discipline.”

Similarly, an enthused Pere Egbi expressed gratitude over being selected as a figure to make an impact.

“I am very happy about the initiative that celebrates everyday working people, making them more visible in their various lines of work. Initiatives like these should be encouraged and picked up by other corporate bodies.

“The government also has a major role to play in this respect. I believe when people are celebrated, they are inspired to be better; to improve. This campaign alone will have a profound effect on the general well-being of everyone in society,” Pere concluded.