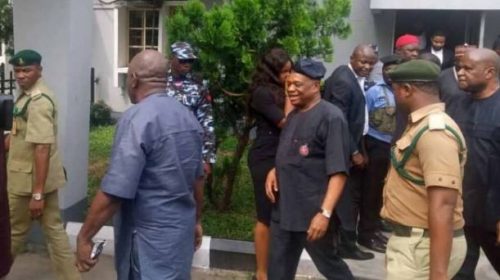 A Lagos Division of the Federal High Court has sentenced a serving senator and ex-governor of Abia State, Orji Kalu, to 12 years in prison for N7.65 billion fraud after being found guilty on all the 39-count charges brought against him.

He was convicted of N7.65billion fraud perpetuated when he was Abia State governor between 1999 and 2007.

Kalu was convicted alongside his firm, Slok Nigeria Limited and his former Abia State director of finance, Ude Udeogu.

The court also ordered forfeiture of all assets of his company to the federal government.

Justice Mohammed Idris, who delivered the sentence, had earlier declared him guilty of the charge in the case that had been on for 12 years.

In an amended 39-counts-charge, they were accused by the Economic and Financial Crimes Commission (EFCC) of conspiring and diverting over N7 billion from the coffers of the state.

In one of the counts, the EFCC alleged that Kalu “did procure Slok Nigeria Limited – a company solely owned by you and members of your family – to retain in its account, domiciled with the then Inland Bank Plc, Apapa branch, Lagos, an aggregate sum of N7,197,871,208.7 on your behalf.”

The prosecution claimed that the N7.1 billion “formed part of the funds illegally derived from the treasury of the Abia State Government and which was converted into several bank drafts before they were paid into the said company’s account.”

The prosecuting counsel, Rotimi Jacobs, said the ex-governor violated Section 17(c) of the Money Laundering (Prohibition) Act, 2004, and was liable to be punished under Section 16 of the same Act.

Apart from the N7.1bn, which he was accused of laundering, the ex-governor and the other defendants were also accused of receiving a total of N460 million allegedly stolen from the Abia State Government treasury between July and December 2002.

The prosecutor said they breached Section 427 of the Criminal Code Act, Cap 77, Laws of the Federation of Nigeria, 1990.

The defendants had pleaded not guilty to all counts.

During the trial, the prosecution called 19 witnesses while the defendants testified by themselves.

Former Abia State Governor, Orji Kalu, who was sentenced to 12 years in prison for fraud, has suggested that he has a role to play in the national politics of 2023.

Kalu, who is the Senate’s Chief Whip smiled at reporters and said, ‘2023, here we come’ as he was led out of the courtroom by Correctional Services officials after his sentencing.

He was also seen asking prison warders, “where are you taking us to?”.

Kalu then begged the prison warders not to handcuff him in public.

The former governor, who appeared shaken, said, “Where are you taking us to now? Please don’t handcuff me. I will follow you.”

A short while earlier, Kalu wiped tears from his eyes with a white handkerchief as Justice Mohammed Idris began reading an abridged version of the 228-page judgment.

Kalu’s associate, Udeogu, was sentenced to 10 years in prison while the company which was used in perpetrating the fraud, Slok Limited, was ordered to be wound up by Justice Idris Mohammed.

The case began in 2007, 12 years ago, when they were first arraigned for the offences, but before a different judge.

In an amended 39 counts, the Economic and Financial Crimes Commission (EFCC) proved that they conspired and divert N7.65bn from the coffers of the Abia State.

A Federal High Court in Lagos found Kalu, guilty of 39 counts of N7.2 billion fraud and money laundering. Kalu was charged alongside Jones Udeogo, the state Commissioner for Finance during his tenure as the governor.

The court ruling has since stirred diverse reactions from Nigerians online: Here are some comments gathered by DAILY POST from Twitter:

@Jeffphilips ” Buhari is after the Igbos that’s why Orji Kalu was convicted despite being APC. Don’t you see Onyeama was set up in the US and Ifeanyi Uba is now almost being prosecuted for owing Nigeria via AMCON; ordinary small N135b?

@Chinnadozie “Orji Kalu has been sentenced to 12 years in prison for N7.65 billion fraud. Justice has been served. His master Buhari could not save him. No treasury looter or fraudster will go scot-free. T. A Orji and Ikpeazu take note.”

@Abd_ojs “If Orji Kalu can be convicted, how much more of “destroyer of souls” from Kwara who has been tormenting the state for years? Saraki, if everyone forgives you, I will not for destroying our state, terrorizing us with your thugs, assassins, etc and confiding us into debts.”

@Lordmuka “Orji Kalu, the evils you did in PDP lived with you even as you ran to APC. Court has called you a thief with 12 yrs in jail.”

@Balatic “Orji Kalu thought by worshipping Buhari, he’d be treated like Babachir Lawal or Abba Kyari lmao. Someone pls give us the name of the prison he’ll be spending the next 12yrs of his life at. We wanna visit and remind him that we warned him!

@Youngotutu ” That Orji Uzor Kalu is a thief is not a question. That Orji Kalu is being sentenced to 12yrs in prison calls for a celebration, however awaiting the decision of the Appeal /Supreme Court, before celebrating is adviseable.”