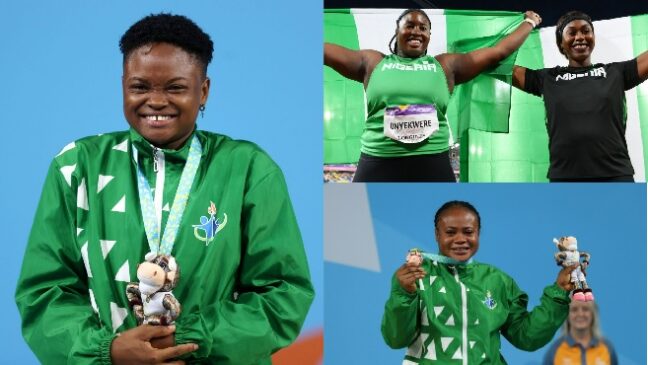 Team Nigeria is flying the nation’s flag high with eighteen medals in the competition so far. It will be Nigeria’s 15th appearance at the tournament, and some of the athletes are already breaking records.

On Tuesday, August 2, 2022, 27-year-old Chioma Onyekwere etched her name in gold when her season’s best Women Discus Throw of 61.70m earned her a gold medal. It became the first time Nigeria secured a gold medal in Discus at the Commonwealth Games. In the same event, national champion Obiageri Amaechi clinched the bronze medal, while Taiwo Liadi won a silver in the Women’s 76kg Weightlifting.

When Rafiatu Folashade Lawal lifted 90kg in the snatch and 206kg in the clean and jerk category, she was unaware she had set a new games record in women’s weightlifting. Rafiatu conquered Africa by picking gold in the 2019 African Games and in the 2021 African Weightlifting Championships. The 25-year-old said her parents “are always proud of” her and that her winning at the Commonwealth Games will make them even prouder.

Speaking of breaking records, Folashade Oluwafemiayo broke her own World Record to win GOLD for Team Nigeria in the women’s Heavyweight Powerlifting event. The Paralympic champion was in incredible form as she lifted a new WR of 155kg to clinch the GOLD medal. It was an inspired Nigerian 1-2 finish, with Bose Omolayo securing the Silver medal with a lift of 145kg, very clear of the third place finisher, Australia’s Hani Watson who won the Bronze medal with a lift of 127kg.

Nigerian athletes at the games are not slowing down, with more medals expected to come.  Watch all the Commonwealth Games action on Showmax Pro as Nigerians show their talent and passion, winning medals for the country and making history.

With eighteen medals at the games, Nigeria is currently in 7th position on the medal table.

Three Nigerian athletes who made it to the semi-finals of the 100m men’s event, did not qualify for the finals, but the duo of Grace Nwokocha and Rosemary Chukwuma, will represent Nigeria at the 100m women’s final where they hope to win a medal each.

A major highlight of Team Nigeria’s ongoing campaign at the Games is Para-athlete Goodness Nwachukwu who set two world records in the women’s F42-44/61-64 Discus Throw on Thursday to win the gold medal. All eyes are also on Tobi Amusan as she competes in the women’s 100 metres hurdles, she had earlier shattered the world’s 100 metres hurdles record and won gold at last month’s World Athletics Championships in Oregon.

In boxing, Nigeria’s Ifeanyi Onyekwere qualified for the semi-finals after defeating Mouafo Feujio of Canada in the quarter-finals of the Super Heavyweight category on August 4, 2022. On the same day, in the group stage of Table Tennis, Nigeria qualified in some of the single and doubles categories she’s competing in, with the athletes hoping to make their mark at the Commonwealth Games.

Do not miss a single action at the ongoing Games. To catch up with the Nigerian team and their incredible performance, simply download the Showmax app and subscribe to Showmax Pro on your iOS or Android device to enjoy uninterrupted streaming of the games.