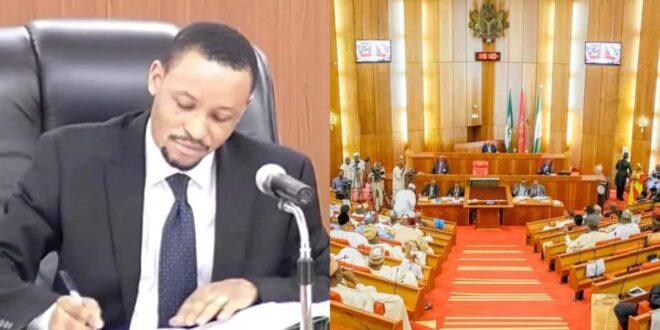 Justice Inyang Ekwo of a Federal High Court sitting in Abuja has ordered the chairman of the Code of Conduct Tribunal (CCT), Mr. Danladi Umar, to go and appear before the Senate to defend himself against allegations of misconduct brought against him in a public petition.

The court dismissed Umar’s suit filed against the Senate and others seeking to stop the probe of his alleged public misconduct at Banex plaza in Abuja on March 29, 2021.

Justice Ekwo held that the suit of the CCT chairman lacked merit and had no cogent reason to stop the Senate from undertaking its constitutional functions.

Justice Ekwo held that Sections 88 and 89 of the 1999 constitution sought to be interpreted by the court and to give Justice Umar protection, did not confer any protection or refuge on him.

The judge said as a public officer administering a law relating to conduct for public officers, Umar has no reason to institute the suit to stop Senate from investigating a public petition seeking justice on a moral standard.

Besides, the judge also said that Section 2 of the Code of Conduct Bureau Act exposes Umar to an investigation by the National Assembly than any other Nigerian and that it would be illogical for Umar to seek to stop the Senate probe as doing so would give an impression that he is above the law.

Justice Ekwo, therefore, held that the declaratory reliefs sought by Umar for an injunction against the Senate cannot be granted because his case lacked merit.