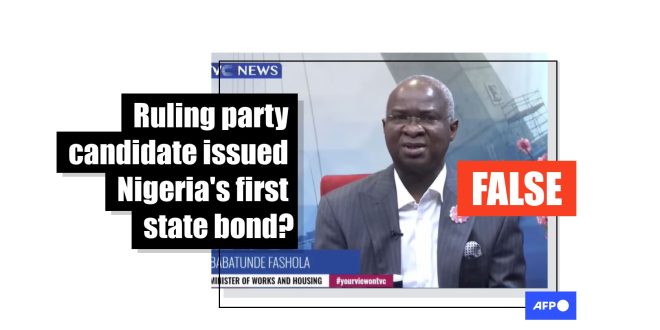 With election fever ramping up in Nigeria, leading members of each party are drumming up support for their candidates. Roads and housing minister Babatunde Fashola, who supports the ruling All Progressives Congress (APC), recently claimed that its presidential candidate Bola Tinubu issued Nigeria’s first state bond for infrastructure and development when he was Lagos state governor. However, this is false: multiple other states issued bonds to finance infrastructure and development long before Tinubu was elected Lagos governor in 1999. Even after he took up his position, several states issued new bonds before Lagos did.

“Let us remember that the first state bond for infrastructure and development in this country was raised during his (Tinubu’s) term as governor,” Fashola told local broadcaster Television Continental on January 12, 2023.

The clip was shared on Twitter where it was retweeted more than 1,000 times. It surfaced as Nigerians prepare to vote in presidential polls on February 25, 2023.

When Tinubu, was Lagos state governor, Fashola served as his chief of staff before becoming governor himself.

In the interview, Fashola noted that some of Tinubu’s initiatives as governor were replicated across Nigeria.

Responding to concerns about Tinubu’s health, Fashola said anyone underestimating the candidate was doing so at “his own peril”.

Tinubu, a two-time governor of Lagos state from 1999 to 2007, has come under intense scrutiny since he won the APC’s nomination. AFP Fact Check has debunked several claims about his health.

But the claim that Lagos became the first Nigerian state to raise a bond for infrastructure under his watch is false.

Private corporations and state-owned enterprises can issue bonds to borrowers in order to finance infrastructure or development projects.

All state-issued bonds since 1978 are listed on the official website of Nigeria’s Securities and Exchange Commission (SEC).

The document shows that the now-defunct Bendel state— present-day Delta and Edo states — issued a bond during military rule in 1978. This predates Tinubu’s administration, which came into power in 1999 when Nigeria returned to democratic rule.

The 20-million naira bond (more than US$43,000 at the time) was issued to finance the development of a housing estate.

In 1986, Ogun state issued a 15-million naira bond for the development of a water project.

A year later, Lagos issued its first bond in the amount of 30 million naira for the development of the state’s Lekki Peninsula area.

After Nigeria returned to democratic rule in 1999, Edo and Delta states were the first states to issue bonds.

Under Tinubu, Lagos state 2002 issued a 15-billion naira bond, the state’s first since the return to civil rule, to refinance development projects in the state, according to the SEC’s document.

Information on the official website of the Lagos state Debt Management office shows that the bond was successfully redeemed in 2008.

Fact Check has debunked several false and misleading claims linked to the 2023 election in Nigeria.