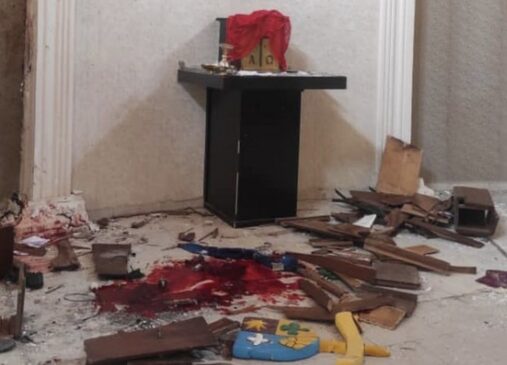 Grace was being shared when the first shot rang out. For dozens of worshippers at the St Francis Catholic Church in Owo, south-western Nigeria, the Lord’s prayer turned into a viaticum – the final prayer.

The armed men that burst through the church doors around 11:30 on Sunday set off dynamite that had congregants scampering to escape the explosions.

As worshipers rushed for the other two exits in the chaos, they were met by more armed men, followed by more shots and loud bangs.

In the end, eyewitnesses say at least 50 bodies – some of the children – were left strewn across the church floors, while many more were injured.

It is still not clear how many people have died and or were injured. But the Bishop of the Catholic Diocese of Ondo says the church, which is one of the biggest parishes in Ondo state, can hold up to 1,200 people. It was full at the time of the attack.

“They killed to their satisfaction before leaving,” chorister John Nwovu told the BBC.

He hid in the sacristy with others while the attack – which lasted for around 30 minutes – was going on and said he was only saved by God’s grace.

An explosion blew up the ceiling above him, burying him and several others, he said.

They bore the weight and pain in silence while the killers went about, picking off worshippers hiding under the pews.

Mr. Nwovu’s brother, also a chorister, was shot in the leg and is recovering in hospital.

“I don’t think the shock of what I saw will leave me for the rest of my life,” he said.

Dynamite residue still litters the church, while the vestry – where many hid – bears testimony to the chaos.

Shoes, bible pages soaked in blood, purses and other personal belongings are still scattered about.

For members of this quiet community in Ondo state, the church was more than a place of worship – it has been a part of their lives since birth.

This was a surprise attack. Owo is relatively peaceful and has been spared the wanton killings that seem to happen weekly across Nigeria.

Attacks on churches have happened before – it was a tactic of Islamist militant group Boko Haram, but the gruesomeness of this attack has shocked many.

This was a congregation of the aged and the very young. Worshippers had turned up in their Sunday best for the Pentecost service, which marks the birth of the church and the official end of the Easter season.

“I saw entire families being wiped away, friends, relatives, those I knew,” said Mr. Nwovu.

For orthodox Nigerian Christians, the first Sundays of the month are also significant. They are usually full of colorful thanksgivings led by families and parish groups and this would have been no different.

Folake Oni, 56, doesn’t remember how she survived the attack. She only recalls exiting the church and being taken to the hospital.

Her daughter Elizabeth Ademiluka told the BBC that her mother was traumatized but physically well.

On Monday, a sombre mood engulfed the town, with hundreds of anxious people at the hospitals and dozens more at the church.

People are walking about with a blank stare, wondering how their lives have changed forever.

There is still a crowd at two local hospitals where volunteers rushed to donate blood after the attack.

But more is still needed, said Nigeria’s medical association, which has urged people to donate more at local hospitals.

Everyone seems to know someone inside the hospital where many are critically injured and some are fighting for their lives.

Many of the survivors at the Federal Medical Centre (FMC) in Owo have been shot in both legs, some might never walk again.

There is a palpable outrage, plenty of which has spilled onto social media, where people followed the attack with shock as it happened.

The pictures are too gory for many Nigerians, even those numbed by the numerous deaths witnessed in the country.

Some of the children killed were unrecognizable – the high-caliber bullets scattered flesh and bones, a medical worker at the FMC told the BBC.

“The audacity of Nigeria to take my parents from me. I will always hate this country!!!!! It’s a promise!,” said one Twitter user.

The outrage over the killings has been further exacerbated by pictures of President Muhammadu Buhari, Vice-President Yemi Osinbajo and other members of the ruling All Progressives Congress (APC) eating at a state dinner hosted by the president, hours after the attack.

In one of the pictures, the politicians dressed in colorful robes are smiling. A convention to elect the party’s presidential candidate for next year’s general elections is underway in Abuja.

Mr. Buhari has released a statement condemning the attack, an action many Nigerians are now used to, given the frequency of such killings.

“Only fiends from the nether region” could have done this “dastardly act”, the statement read.

Elected on promises to end insecurity, Nigeria’s security challenges have worsened under Mr. Buhari, who is winding down to his tenure’s end next May.

Armed gangs which operate across the country are rarely brought to book and no one has any hopes that the killers of Owo will pay for the atrocity.

All eyes are now on the state governor, Rotimi Akeredolu, who has vowed to hunt down the killers.

This incident will feel personal for Mr. Akeredolu, as he comes from Owo.

He is one of the southern governors who have been very critical of the activities of herdsmen, who generally come from the north, and open grazing in Nigeria. He caused a huge furore last year when he ordered them to leave the forests in the state, accusing them of criminality.

There is nothing that links herders to the church attack, who are easily scapegoated for such killings. However, they have been accused of similar attacks in the past, especially in central Nigeria, where the conflict between herders and farmers for land has been especially fierce.

The killers wore khaki trousers used by many of Nigeria’s many paramilitary groups, said Mr. Nwovu, so they could have been anyone.

The attack comes exactly a week after the head of the Methodist Church in Nigeria was abducted, along with two other clerics in the south-east of the country, and freed after paying $240,000 (£190,000).

Also, two weeks ago, two Catholic priests were kidnapped in Katsina, President Buhari’s home state in the north of the country. They have not been released.

“But I can’t stop worshipping God,” he added.