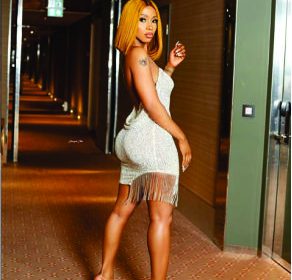 Mercy Eke, winner of the Big Brother Naija 2019 edition tagged Pepper Dem has joined her colleagues who have lost control on the social media showcasing whatever dignifies womanhood.

Mercy Eke, winner Big Brother 2019, peppers dem who pocketed N30 million and an SUV from Nnoson Motors went on the social media with a see-through attire showcasing her pant and bra in her ‘thank you’ message to Enugu fans who hosted her during the week.

The Big Brother reality show winner has been severally rewarded since she came out of the Pepper Dem edition.

For winning the Big Brother show, she got a flat and has also secured numerous deals, among them, was the deal she signed with global brand, Remmy Martins.

But notwithstanding the big deals, she seemed to have been caught by the celebrity bug, where most celebrities go naked in their quest to amass a massive following on social media.