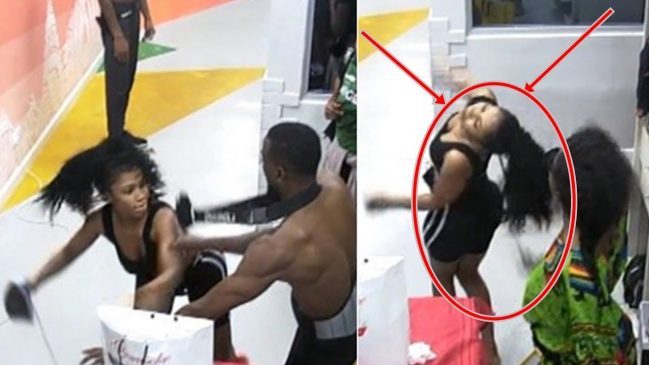 BBNaija winner Big Brother Naija (BBNaija) 2019 winner Mercy Eke and fellow ex-housemate Omashola, were the center of attention on episode7 of the reunion show which aired on TV.

The latest episode of the BBNaija reunion show witnessed a major drama between Mercy and Omashola – Mercy got into a heated argument with Omashola because he once tagged her prostitute when they were still in the house.

The show’s host, Ebuka Obi Uchendu, in his usual fashion had steered up some of the controversial drama that took place back when the housemates were in the house, with the hopes that they would talk it through and settle individual grievances amicably.

However, things went completely out of control after the issue of Omashola once describing Mercy as a prostitute was brought to the table.

A throwback clip was played for the housemates that captured the moment Omashola and Mercy got into an argument, and he went on to slut-shame her in a personal conversation with Seyi.

Reacting to the clip, an enraged Mercy flipped the switch on Omashola and tried to set things straight with him. Mercy noted that she had a good relationship with him in the house but was taken by surprise when she came out of the house and heard some of the things he said about her.

This resulted in a back and forth between the two as they also resorted to cursing and hurling abusive words at each other. Mercy fights Omashola In his defense, Omashola said he thought Mercy had forgiven him because this was what she made him understand when they met after she left the house.

Still in the middle of the heated exchange, when Omashola suggested that Mercy was trying to use him to get attention, she quickly reminded him that she won the reality show and as such every other housemate needed her for attention.

At the end of it all, both housemates eventually apologized to each other for going too far and saying hurtful things in the heat of anger.