Lucy of the BBnajia season 5 edition has been evicted from the on-going Big Brother Naija reality tv show.

She is the only person out of the six nominated housemates to be evicted in the 7th week of the show.

Ebuka in his usual cold-fashion, then announced Lucy as the next housemate to leave the Big Brother Naija reality TV show. 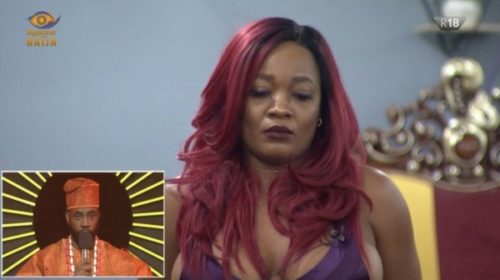 She was, however, the only housemate to be evicted while all five others were declared safe.

When asked what would be next for her (Lucy) she said she would continue her grill business and perhaps expand it into a full-blown restaurant.

Meanwhile, Erica was earlier disqualified after her inappropriate actions earned her a third and final strike.

Before the eviction show commenced, Big Brother addressed some major issues in the house and after reading the riot act to them, housemate, Erica, who was the Head of House, was disqualified for breaking several house rules.

During the drama, Erica threatened Laycon; claiming she will do anything in her power to make sure Laycon suffers in life.

This contravenes the house rules which state that “housemates should never threaten, intimidate or act violently towards each other.”

Show host, Ebuka put viewers on the edge of their seats as he purposely announced KIDDWAYA’s name which would have meant he’d be the next housemate to leave the house. However, Ebuka calmed the storm by saying he is safe.

Housemates left to battle for the grand prize money of N85 million are Prince, Ozo, Neo, Kiddwaya, Trickytee, Dorathy, Vee, Laycon, and Nengi in the next three weeks.