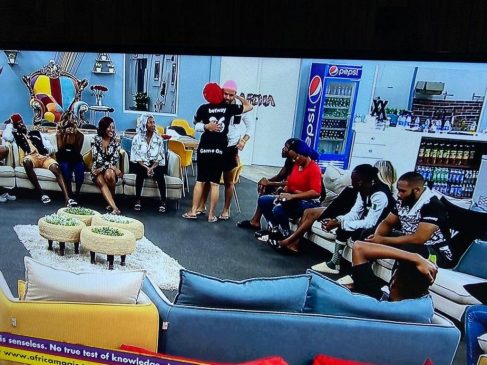 Ozo has emerged winner of the head of house for the week six after a beautiful performance in the HOH game challenge at the arena.

This is the second time he has won the highly sought after position in the house. It was a hard game that saw great competitors like Prince, Vee, Triky Tee come close to the title but were buzzed out at the end.

Ozo emerged winner of the Head of House games after beating the thirteen other housemates at the arena.

Obviously, not a newcomer to the challenge, Ozo reigned supremacy over the other housemates as his closest rival was Vee.

However, Vee couldn’t win the challenge because of the timing of her scores.

For his deputy, Ozo selected Nengi as first choice, Dorathy as second and Vee as a third.
Winning the head of house games earns Ozo and his deputy immunity from this week’s evictions as well as exclusive access to the HOH lounge. Regarding their guests at the lounge, they chose Vee and Neo.