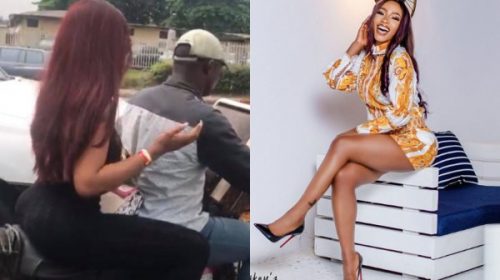 Apparently, Mercy was rushing down to the airport so she won’t miss her flight to Abuja for Tiwa Savage’s Everything Savage Abuja Concert. She was spotted with her boo.

What really made Nigerians more surprised is the fact that Mercy won an N25 million worth SUV aside from the cash gift that came with her winning the reality show. BBNaija winner Mercy Eke jumps local Okada in Lagos, Nigerians react

Big Brother Naija 2019 winner, Mercy Eke was spotted earlier today on a bike while heading to the airport with her luggage. Nigerians react as BBNaija winner Mercy Eke rides Okada in Lagos.

The fastest way to beat traffic congestion in Lagos is to either leave home hours before your appointment or take a bike popularly known as Okada to your destination.

Sources said the traffic congestion in the Lekki area of the state was quite bad which was why the reality show star boarded a commercial motorcycle.

But while this is no big deal for regular people, celebrities are mostly not spared when spotted on a bike ride. Such is the predicament of BBNaija winner Mercy Eke when she was spotted on a local Okada.

Many Nigerians could not contain their reactions spotting the winner of the Pepper Dem season of the reality show on Okada.