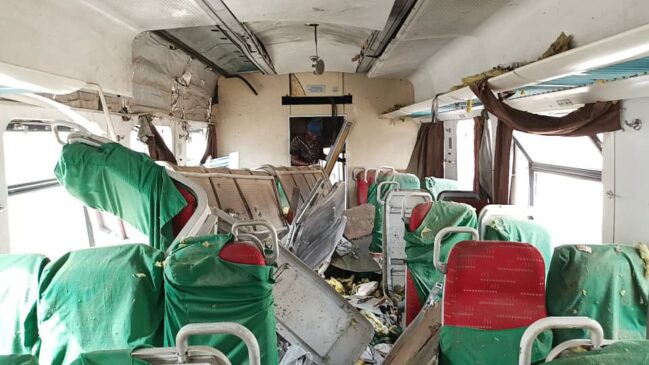 About 168 people are still missing in Nigeria after a deadly attack on a busy train last week, the state rail company says. It is not clear how many of the 168 have been kidnapped for ransom – some may have gone home without telling the authorities.

Gunmen blew up a section of track between the capital, Abuja, and the northern city of Kaduna last Monday. During the ordeal, at least eight passengers were killed. One survivor has told the BBC how a decision to change carriage could have saved his life and the lives of his family.

“I am happy that I am alive and well,” he said on condition of anonymity. “But I feel so sad for those killed and the injured – it could have been me,” said the man, who almost missed the train altogether but ran with his wife and two children to catch it just in time.

Once onboard, the family walked from one carriage to another after fellow passengers had said they were occupying the wrong seats. They had been sitting in coach 17, which was one of those attacked, but moved to coach 12. “We heard a loud explosion at about 19:45 – it shook the train and then the training ground to a halt,” he said.

Suddenly there was the sound of gunfire coming from different directions as the attackers apparently surrounded the train. “I gathered my family and we laid on the floor of the train as we saw other passengers doing,” he continued. “After some time, it seemed the gunmen forced their way into the coaches because we heard people barking orders at passengers in other coaches.

There were some gunshots inside the coaches as well. “People were ordered out of the coaches and led into the bush. Nobody entered our coach,” the survivor said. “My decision to change coach saved my life and my family.” Monday’s attack has not been claimed by any group.

But the governor of Kaduna state suspects it was the work of Boko Haram Islamists teaming up with a kidnapping gang and said that rescue operations were underway while ruling out paying any ransoms.

There were 362 registered passengers on board the train when it was raided, however, the Nigerian Railway Corporation has not said whether the 168 people believed to be missing are all customers or if some train staff are among them. It was initially reported there were 970 passengers on board – the reason for the discrepancy is not clear.

Reuters news agency quotes relatives of some of the missing as saying suspected bandits had contacted them to tell them they were holding their loved ones.

Such gangs have become rife in northwest Nigeria, and Kaduna state is considered the epicenter. Earlier this month, there were reports that Kaduna’s airport was attacked. In the last 24 months in Nigeria alone, armed gangs have killed hundreds of people and forced thousands to flee their homes.

With roadside kidnappings all too common between Abuja and Kaduna, the train service appeared to be the only safe and affordable option left. But to the frustration of Nigerians, this was the second attack by armed gangs on this same stretch of railway in six months.

“Many would now prefer staying at home or within their neighborhoods,” he said, adding that businesses relying on the steady flow of people between north-western Nigeria and Abuja would suffer most. Despite promises to make Nigeria’s train network safer following the attack in October, little progress seems to have been made.

“I am devastated and I honestly don’t know what to tell Nigerians anymore,” Transport Minister Rotimi Amaechi said after last week’s attack. “The process of procuring the integrated security surveillance and monitoring solution has been tedious. If the processes were shortened, we would have saved lives.”

There were about 18 policemen on board Monday’s train, he told the BBC, but they were outgunned and eventually ran out of ammunition. In the future military aircraft will escort passenger trains between Kaduna and Abuja once repair work on the 190km (120-mile) track is complete, according to Mr. Amaechi.

But he denies that the failure to protect passengers’ lives is a symptom of Nigeria’s wider security failures. “You cannot say Nigeria is a failing state,” Mr. Amaechi said. “If you want to deal with insecurity, you must first and foremost deal with poverty.”

Nigerian commentator Farooq Kperogi for one is not convinced, saying the “tragic” train attack showed “the absence of even a pretence to the government in Nigeria”. Meanwhile, public affairs analyst Charles Ughele accuses the Nigerian authorities of a “dereliction” of their duties, comparing their leadership unfavorably with that of Ukraine’s embattled President Volodymyr Zelensky.

Nigerian President Muhammadu Buhari has even been urged to resign by opposition politician Kassim Afegbua of the Peoples Democratic Party, who said he was “utterly ashamed” by what he considered to be government inaction.

Presidential spokesman Garba Shehu told the BBC that military and security chiefs have now had orders to be more “decisive” in their pursuit of bandits, and said “surveillance and monitoring platforms” were being sought for the Abuja-Kaduna railway plus southern Nigeria’s Lagos-Ibadan rail link.

A similar system was promised, but not delivered, six months ago. Mr. Shehu however rejected evidence that Kaduna city’s airport had itself been attacked by an armed gang in March, saying “yes, they shot at a civilian surveillance official near the perimeter fence, which is very sad, but the Kaduna airport was not breached”. “I will not pretend to you that we don’t have security problems,” Mr. Shehu told the BBC.