Aviation Unions have stated that they would address the issues of Condition of Service of aviation agencies, minimum wage, the relocation of the headquarters of various agencies to Abuja in the interest of its members in the various agencies.

According to the unions negotiated Conditions of Service for the Nigerian Airspace  Management Agency(NAMA), Federal Airport Authority of Nigeria(FAAN), Nigerian Civil Aviation Authority(NCAA) and Nigerian Meteorological Agency(NIMET) have been lying fallow – wholly or partially unattended by either, or both, the Salaries and Wages Commission and Office of the Head of Service of the Federation for upwards of seven years; within which period there ought to have been about three turnovers of the documents.

They contended that all efforts, including a personal visit by the Hon. Minister of Aviation, Senator Hadi Sirika to the Commission, and numerous communication between the Agencies/Ministry of Aviation and the two establishments have failed to impress both the Commission and OHOSF in the above regard.

“They have both blatantly refused all entreaties to recognize the injustice they have wrecked on hapless workers who have had to bear the brunt of their nebulous ways. How long such a callous attitude shall be borne by aviation workers is anyone’s guess,” the unions said. 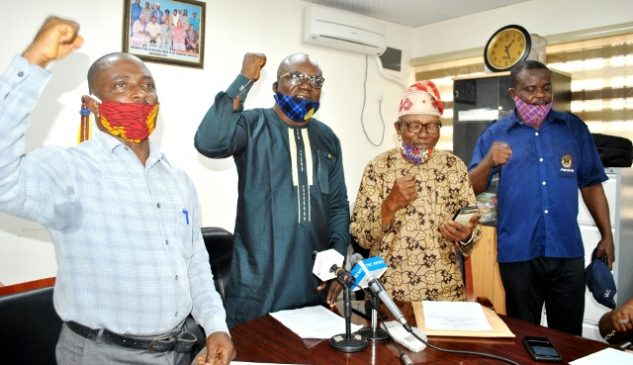 On minimum wage, the unions said that the  Minimum Wage Act was signed into law and that took effect from April 1, 2020, adding that workers in the public service have since 2019 been enjoying the benefits of the reviewed wages but lamented that up till this moment only two of the six aviation agencies have implemented the new wage.

The further explained that efforts on the unions’ part to implement the Act in NAMA, NCAA, FAAN, and AIB have proved futile.

Speaking on the relocation of agencies Headquarters to Abuja by the Minister of Aviation, Senator Hadi Sirika, the said, “We have variously protested the order given by the Hon. Minister of Aviation for the relocation of the Headquarters of FAAN, NAMA, NCAA, and AIB from Lagos to Abuja at this time. While submitting to Government the right to determine the appropriate location of its agencies (though there is ample room for debate on the matter), we have, however, pointed out to the government the need to be circumspect in pursuing this particular objective at this particular time. We pointed at the present crisis of COVID-19, the absence of budgetary provision for most, if not all the agencies in the current budget cycle, the unavailability of office buildings in Abuja, the absence of any real pressure to do so, and other extenuating circumstances which we had hoped would cause a change of strategy to a more pragmatic approach.”

The unions posited that despite their position to the government why the relocation is not proper, the union’s efforts in this regard have been to no avail, adding that now the vexing issue of refusal of the various managements to engage with the unions on the labour implications of the relocation has become a new crisis point.

“The only exception to this is FAAN. We have a responsibility to the workers of these agencies to insist that their genuine rights and interests with regard to relocation are adequately protected.  No one should expect that our unions will shirk that responsibility,” they said.

The unions said that despite their efforts and numerous interventions of the Ministry of Labour, most Nigerian airlines have made it impossible for their employees to freely join trade unions of their choosing in clear violation of the Constitution of Nigeria and the Labour Act.

They stated that these airlines had made the express instruction that the employee cannot belong to a trade union condition precedent to employment in their companies.

According to them, “We have tolerated this travesty for too long. It is now time to end the slavery going on right under our noses in these airlines. We, therefore, serve notice to them all that freedom for the employees is not negotiable and must be obtained by whatever means possible under the law. Air Peace, Azman Air, Dana Air, Max Air, Jed Air, Skypower Airlines, Med-View Airlines, and the rest of them should take note.”

They alleged that many aviation concerns have chosen the path of dishonor by hiding behind the pandemic to do havoc to their employees but that while the unions very much recognize the adverse impact of COVID-19 on aviation businesses, the law and even decency dictate that all parties to the work environment need to put their heads together to chart a common path through the crisis; a path that fairly shares the losses among the component parts of the work environment.

They added that “Our unions successfully engaged many organizations in this respect. But, many others chose the discredited path of unilateralism and by so doing have done a grave injustice and plain wickedness to their employees.”

They listed the airlines involved to include: Arik Air, Aero Contractors, Turkish Airlines, Air Peace, Dana Air, Azman Air, Caverton Helicopters, and many others, adding that in the coming days, these corporate entities will have to contend with the wrath of aviation workers unless they ameliorate their various situations soon enough.