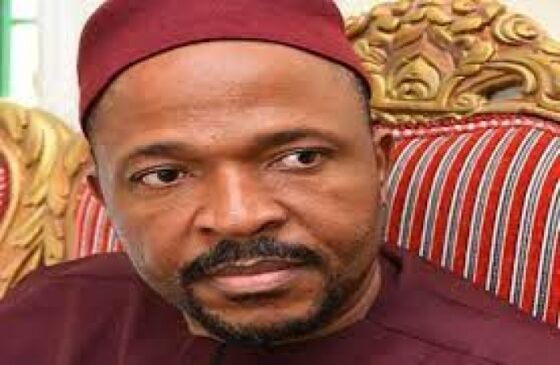 The Academic Staff Union of Universities has written to the University of  Jos, demanding a probe and the recall of the doctorate degree of the Minister of State for Education, Chukwuemeka Nwajiuba.

Also on Wednesday, students from different tertiary institutions in the Edo State protested the lingering ASUU strike in Benin, the state capital.

The PUNCH reports that ASUU, which commenced a warning strike on February 14, 2022, has yet to call off industrial action.

Some of the demands of the union include the demand for university autonomy, the release of revitalization funds for Nigerian universities, and the deployment of the University Transparency Accountability and Solution payment platform for the payment of salaries and allowances of university lecturers among others.

The government and the union have yet to reach an agreement on the issues raised.

As the disagreements linger, Nwajiuba confirmed to The PUNCH that the union had written to UNIJOS asking for the recall of his certificate.

The minister said, “ASUU wrote UNIJOS to recall my certificate. I am not sure what it is they are pursuing. I was informed by the university that this was the directive from ASUU: to investigate my certificate. That is how far they have gone.

The strike has, however, been taking its toll on the students, some of whom have been complaining of its adverse effects on them.

Vehicular and human movements were disrupted in parts of Benin for several hours on Wednesday as students from across tertiary institutions in the state protested the continued strike.

They asked for the government’s intervention as they vowed to continue a daily stay in the city centre until their demands are met.

The students mobilized from the University of Benin, Ambrose Alli University, Ekpoma, and the Federal Polytechnic, Auchi.

They displayed placards with various inscriptions and blocked the Oba Ovonramwen Square popularly called Ring Road to express their grievances.

Their action resulted in traffic gridlock around the axis, including Akpakpava, Mission, and Forestry roads.

Speaking on the issue, National Vice President, Special Duties of the National Association of Nigerian Students, Idiahi Thomas, faulted Nigeria’s educational sector, saying, “our leaders have bastardized it, and, as it is, Nigerian students are at home and yet, government officials are busy purchasing forms for N100 million, an amount presidents of other countries cannot earn constitutionally throughout their four-year tenure.

“If the Federal Government does not want us to remain here, they know what to do. You are taking a course of four years or five years, but the strike makes you spend six to seven years. Postgraduate students who are supposed to spend 18 months are spending two to three years and some get frustrated and abandon their program.”

A student Union leader from AAU, Abumere Joseph, said, “We are tired of staying at home. For the past three months, we have not attended classes, I was supposed to graduate in April but as it is now, I don’t know when I will graduate, I have been in one level for close to two years, so we are tired.”

On his part, the President, of the Students Union Government of UNIBEN, Foster Amadin, said the strike is “suffocating the dreams of Nigerian students while politicians go about their political ambitions and the striking lecturers are going about their individual businesses.”

A civil rights leader, Kola Edokpayi, said the government does not respect the wishes of the people of Nigeria lamenting that “Our students are at home, yet the Minister of State for Education was able to buy a presidential nomination form of N100m.”