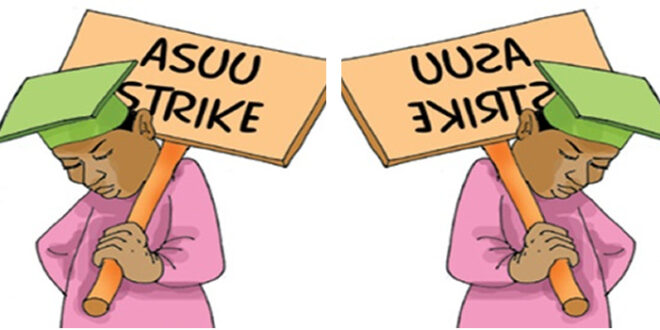 Education is on the Concurrent List in the 1999 Constitution and it means federal and state governments can legislate on it.

The situation accounts for why both tiers of government set up their own universities. With 48 state universities and 43 federal ones as at the last count, the Academic Staff Union of Universities, ASUU, has more branches in state-owned universities than those owned by the Federal Government.

To the chagrin of many state governments, ASUU members in their universities have been part of the industrial action embarked upon by the union, in which some of the issues at stake are peculiar to only federal workers. The most important of the issues is the adoption of the Integrated Personnel Payroll Information System, IPPIS, as the payment system in the university sector. The FG has been using that to pay its workers for some years now.

Other demands that cut across all levels are adequate funding of the universities, provision of modern facilities and the improvement in workers’ salaries and general welfare.

However, after extending its industrial action indefinitely on Monday, the union is now walking a tightrope as the majority of its members, drawn from branches in state-owned universities, are being pressurized to opt-out of the strike.

In Oyo State, the Acting Governor, Mr. Bayo Lawal, said lecturers in the Ladoke Akintola University of Technology, LAUTECH, Ogbomoso, should disengage from the strike. Lawal issued the directive during a stakeholders’ engagement forum on the 2023 budget held at the International Conference Centre of the University of Ibadan, saying the current administration has settled all necessary obligations.

He said: “What concerns us concerns us, what does not concern us we should ignore. The ASUU issue is dear to my mind because Oyo State Government is not owing LAUTECH a dime. About a month ago before His Excellency traveled out, we held a meeting with the management of LAUTECH and the leadership of the students’ union to say that look, this ASUU strike does not concern you.

Also, the Governing Council of Ibrahim Badamasi Babangida University, Lapai, Niger state,(IBBUL) has directed all staff and students of the Institution to resume for the second semester of the 2021/2022 academic session on Monday, September 5.

A statement signed by Deputy Registrar, Information, Alhaji Baba Akote, called on all categories of staff including students to heed the directive.

“This is to inform all staff and the entire students of Ibrahim Badamasi Babangida University, Lapai that the second semester for the 2021/2022 Academic Session commences on Monday, 5th September 2022.

“Equally, all Staff is expected to resume work the same day and students are please advised to heed to the special announcement in their own interest,” the statement declared.

However, the Governing Council did not stipulate any penalty that awaits any erring staff or student.

Similarly, the management of Ekiti State University, EKSU, Ado-Ekiti, issued a statement calling on workers to resume their duty posts.

The National Association of Nigerian Students, NANS, also joined the league of those calling on state-owned universities to opt out of the action. NANS President, Sunday Asefon, said ASUU has lost the support of Nigerian students given the unpatriotic disposition displayed by them in extending their strike indefinitely.

Asefon said students would no longer support the union’s call for intervention as he accused the body of being self-serving.

“We have taken the time to review the decision of ASUU to declare an indefinite strike after the ongoing six-month strike. We consider the decision not only unpatriotic, and unnecessary but wicked and definitely not in the interest of our nation nor the tertiary education system in Nigeria.

“We call on state governments to forthwith liaise with Vice-Chancellors of state institutions to announce the resumption of academic activities and grant the authority of the vice-chancellor to enforce the resumption as state universities should never have joined the strike in the first place,” Asefon said.

The National President of the National Parent Teacher Association of Nigeria, NAPTAN, Alhaji Haruna Danjuma, expressed disappointment about the continuation of the strike generally.

“We thought the issues would be amicably resolved and the strike suspended, but that was not the case. It is a big blow. We need divine intervention in this matter. The government has more than one thousand and ways to resolve this matter. We implore the President to tread softly on the issue of “No work, no pay,” as that is the major grey area now.

“We appeal that the Nigeria Labour Congress, NLC, the FG, and ASUU hold a meeting to resolve this. The union and the government should consider the plight of our children. There is no need to escalate the situation,” he said.

Despite the pressure from some angles, lecturers in state universities are reluctant in discontinuing the strike because of three main reasons. Salary and welfare issues, adequate funding and provision of facilities and the proliferation of universities by both federal and state governments.

Even though the FG is proposing an increment in the salary of its university workers, whatever is agreed on would eventually become the plank lecturers in state universities would hinge on their own demands. It is just like the National Minimum Wage issue. It was put at N30,000 monthly, some states are paying it, but there is no state that has not improved on its previous level.

“The issue of salary and welfare is non-negotiable. Who does not want his financial status to improve? It is not a matter of whether one works in a state or federal university. The salary lecturers are paid now is nothing to write home about,” ASUU Lagos Zone Coordinator, Dr. Adelaja Odukoya, said.

The issue of the provision of facilities in our universities cuts across all ownership structures. And regarding the proliferation of universities, the FG and some state governments are guilty.

In Delta State for instance, apart from the Delta State University in Abraka, the state government in one fell swoop set up three more when some people are advocating expanding DELSU.

Many are saying that expanding existing universities is a better approach. Only recently, at the 71st birthday celebration of Emeritus Professor Peter Okebukola, the Registrar of the Joint Admissions and Matriculation Board, JAMB, Prof. Is-haq Oloyede, said the way universities are being set up, Nigeria may soon have a University of Road Safety.

Undoubtedly, the union is under serious pressure, but the leaders are saying there is no cause for alarm. Speaking with Sunday Vanguard, Odukoya said the union is one and solid. “There is no cause for alarm. Even those saying state universities want to pull out are just joking. Almost immediately some state governments directed the universities under their control to reopen, our members there held congresses where they reiterated decisions to continue with the struggle.

“I can give you the names of such universities, IBB University in Niger State, Ekiti State University, and Kaduna State University among others. The issues at stake go deep down then this is a state or a federal University. Our children attend all and they deserve the best. Our members working there deserve to be treated humanely. We are simply tired of the promises the government gives without any intention to fulfill them.

“Nigerians should ask the government where it got over $200 million to meet the demands of foreign airlines who threatened not to fly to Nigeria again. Let us convert the money to naira, is what ASUU is asking for for the improvement of our universities and staff welfare up to that? We have been saying it, the government wants to kill our universities because their own children don’t attend them,” he stated.

With the threat of registering another academic staff union, reopening universities by fiat and paying workers who resume duties, it is now to be seen how long ASUU can hold on to its industrial action.